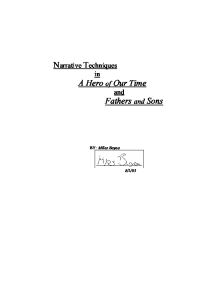 Narrative Techniquesin A Hero of Our Time and Fathers and Sons

Narrative Techniques in A Hero of Our Time and Fathers and Sons BY: Miles Boyea 8/1/03 Narrative technique is an important literary device in the creation of any work of literature. In A Hero of Our Time, Mikhail Lermontov use three first person narrators while in Fathers and Sons, Ivan Turgenev use just one omniscient narrator. Through these methods, Lermontov gives the personal views of the three main characters while Turgenev's style is more objective, allowing the reader inside the heads of all the characters. As a result, Fathers and Sons is more detailed and revealing, making it more predictable than A Hero of Our Time, which is more challenging and propels the reader through the story more rapidly. What were the two authors' reasons for using these particular narrative styles, and how did their choices benefit the writers? Lermontov's use of the first person narrative is very effective for describing two of the main characters of the story, Pechorin and Maxim. Pechorin gives his views of the world and Maxim gives his on Pechorin. Pechorin says," I was ready to love the world... ...read more.

The narrator reveals the hearts and minds of all the major characters from story to story. Fathers and Sons carefully describes the relationships among its characters. The main relationships are between Bazarov and Arkady's family, Arkady and Bazarov, and also Bazarov and Anna Odintsov. Bazarov, Arkady's new friend, does not get along with Arkady's uncle, Pavel Petrovich. " You insult the Russian people." (Turgenev, 123) Pavel says. This happens during one of their arguments, where Pavel disagrees with Bazarov's rude behaviour and lack of principles. The narrator reveals Pavel's feelings of disagreement with Bazarov's beliefs. Another story shows Bazarov engaging in another relationship with Ferinchka, who is the mistress of Pavel's brother. Nikolai Pavel sees them kissing," Bazarov... kissed her vigorously on her parted lips... Ferinchka instantly moved away... Pavel Petrovich showed himself...". Then the narrator says, "Bazarov felt shame and contemptuous annoyance... [he then] congratulated himself" (Turgenev, 234). The reader then understands that Bazarov enjoys upsetting Pavel. Bazarov meets and falls in love with Anna Sergeyevna, but is unable to be loved in return. Anna allows Bazarov to love her, but never shows her love, "I love you idiotically" he said but she " was filled with fear and at the same time felt sorry for him" ( Turgenev. ...read more.

Therefore, it would have been complicated to tell the entire story using the first person narrative, as in A Hero of our Time. If the story were told by the main characters, Bazarov or Arkady, information in the other stories would not have been revealed, since each story depends on the relationships with different characters. Bazarov dies before the end of the novel, therefore he would not have been able to tell the entire story. Arkady and Bazarov grow apart and, "Arkady completely forgot about his former mentor [Bazarov]" (Turgenev, 272). The narrator shows that they begin to live separate lives and Arkady does not need Bazarov's guidance anymore. Therefore, Arkady could not tell the story either because he would not have able to know about the relationship between Bazarov and Anna. Turgenev and Lermontov used different narrative techniques in writing their novels and they deliberately chose the technique most appropriate for their type of story. Lermontov used the first person narrative because his novel is emotional and closely based on one main character. It is also related to his own life. Turgenev, on the other hand, uses an omniscient narrator because his novel is based on a series of stories that can only be told completely by a voice that does not belong to any of the individual characters. ...read more.