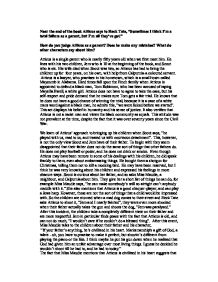 Near the end of the book Atticus says to Heck Tate, "Sometimes I think I'm a total failure as a parent, but I'm all they've got." How do you judge Atticus as a parent? Does he make any mistakes? What do other characters say about him? Atticus is a single parent who is nearly fifty years old when we first meet him. He lives with his two children, Jem who is 10 at the beginning of the book, and Scout who is six. His wife died when Scout was two, so Atticus has had to bring the children up for four years, on his own, with help from Calpurnia-a coloured servant. Atticus is a lawyer, who practises in his hometown, which is a small town called Maycomb in Alabama. Hard times fall upon the Finch family when Atticus is appointed to defend a black man, Tom Robinson, who has been accused of raping Mayella Ewell, a white girl. Atticus does not have to agree to take the case, but his self-respect and pride demand that he makes sure Tom gets a fair trial. He knows that he does not have a good chance of winning the trial, because it is a case of a white mans word against a black man, he admits this, "we were licked before we started". ...read more.

She evidently has very high regards for him, for instance, she comments on his consistency of character, whether privately at home or publicly in town. His conduct is always gentlemanly despite provocation. An example of this would be when Bob Ewell spits in his face and curses, and Atticus does not become angry or stoop to Bob's level, no matter how much it may have upset him. This is also an example of how level headed and kind Atticus is, "He had to take it out on somebody and I'd rather it be on me than that houseful of children" Despite the fact that Atticus and Tom Robinson lost the case against the Ewells, and even though Bob Ewell knew that he was lying and that the verdict was unjust, he still felt like he needs revenge against Atticus. This may be because Atticus humiliated him in front of most of Maycomb. This says a lot about the sort of man Bob is, one would think that the fact that Atticus lost the case would be satisfactory revenge, but towards the end of the book, it is evident that this is not so. The underestimation Atticus makes about Bob Ewell is maybe the biggest mistake he makes. ...read more.

"Before Jem looks at anyone else he looks at me, and I've tried to live so I can look Squarely back at him...frankly I couldn't meet his eye, and the day I can't do that I'll know I've lost him." It may seem that some of his actions were fool hardy, for instance, sitting outside the jail when the lynch mob were out to get Tom Robinson, but this action rather demonstrates Atticus' belief that truth is worth making the supreme sacrifice for, no matter what the cost to himself. By his action he was taking on the whole beliefs and prejudices of the town, and taking on a higher moral ground. This is passed on to his children who show the same personal integrity. I consider him a good father because he passed on a set of moral guidelines and beliefs to his children, by not dictating to them, but by giving them opportunity to learn themselves. The children became independent thinkers and individuals in their own right, and in his time as well as ours there needs to be people who are not afraid to challenge injustice and be prepared to live according to their own conscience even if it seems unconventional to others. I think they were very fortunate to have a father like Atticus. By Rebecca Hickman 10 Hart ?? ?? ?? ?? ...read more.