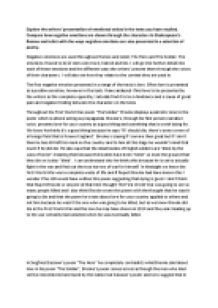 Negative emotions are used throughout Romeo and Juliet, The Hero and The Soldier. The emotions I found to be in texts were love, hatred and lies

﻿Explore the writers? presentation of emotional voices in the texts you have studied. Compare how negative emotions are shown through the characters in Shakespeare?s Romeo and Juliet with the ways negative emotions are also presented in a selection of poetry. Negative emotions are used throughout Romeo and Juliet, The Hero and The Soldier. The emotions I found to be in texts were love, hatred and lies. I will go into further detail into each of these emotions and the different ways the writers? present them through the voices of their characters. I will also see how they relate to the context they are used in. The first negative emotion presented in a range of the texts is love. Often love is presented as a positive emotion, however in the texts I have analysed I find love to be presented by the writers as the complete opposite; I actually find it to be a hindrance and a cause of great pain and negative feeling between the characters in the texts. Throughout the First World War poem ?The Soldier? Brooke displays a patriotic tone to the poem which is almost acting as propaganda. Brooke?s, through his first person narrative voice, presents love for your country as a good thing and something that is worth dying for. We know he thinks it?s a good thing because he says ?If I should die, there?s some corner of a foreign field that is forever England?. ...read more.

These gestures were a private joke between the Capulet family but were taken as insults from the Montague?s, the outcome of this was that a public brawl broke out. This was a chance for both of the household?s members to display just how much they hated the other house through the use of force. As you can imagine as with most fights someone did get hurt and that is exactly what happened in this instance. The next example of hatred is in Sassoon?s poem ?The Hero? is an example of indirect behind someone?s back hatred which causes awkward situations. The insulting imagery used by Sassoon is when he describes Jack as being a ?Useless Swine? I believe this to mean that Sassoon did not like Jack because while Sassoon was fighting bravely, Jack tried to get injured so he could come home. Instead Jack was killed and sent home in a coffin. Sassoon believes that the brother officer should tell Jack?s mother how he really died but instead they tell her ?Gallant Lies? so her son seems to be a hero. The fact that Jack is seen to be some sort of hero when he really shouldn?t is the reason that Sassoon hates Jack and portrays him to be a coward because that?s what he was a coward. Again in this instance of hatred Jack?s mother is hurt because her son has died but the awkward part is everyone knows her son was coward apart from her. ...read more.

Shakespeare wants the audience to recognise this pause so they know she wants to hug him however Juliet?s mother is oblivious to the pause and thinks Juliet wants Romeo dead. Further into the seen Juliet?s mother announces that Juliet will be married to Paris, Juliet asks the marriage to be delayed and says she wants to marry Romeo. This does not go down well with either Juliet?s mother or her father Lord Capulet who has entered with the nurse. I am not sure what gets Juliet?s parents angrier the fact that she has already lied to her mother and says she hates Romeo but now she says she loves him or that she is disrespecting her father, a man of authority. Lying in both texts has been a bad thing to do and caused negative emotions, in the first instance it has given a mother false readings on what her son was actually like, it has caused guilt in an army officer and in Romeo and Juliet it has ripped a family apart. I believe these things all count as causing negativity and have a negative outcome on relationships thanks to lies. To conclude I believe that Romeo and Juliet is a story of Love, lies and hatred as well as The Hero and The Soldier. I believe I have proved these emotions to be negative in all three texts and that I have shown the way that some people react to situations may be down to the time period, their culture and also their status. ...read more.