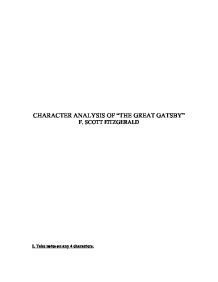 CHARACTER ANALYSIS OF "THE GREAT GATSBY" F. SCOTT FITZGERALD I. Take notes on any 4 characters. Nick Carraway: * Nick, is the narrator of this story. Every single episode is described as he sees it. This can be seen by the usage of the first person when Nick expresses himself "In my younger and..." (page 1). * As Nick explains us in the first chapter, he is from a wealthy family and comes from the mid-west part of the U.S. We also know that Nick lives in New-York, Long Island, in an area called West Egg. He studied at New-Haven and graduated in 1915. That is where he met Tom Buchanan. He knows Daisy too because she is his cousin. * He says he is in the bond business. He thinks the bond business is a good one because "everybody I knew was in the bond business". * At his arrival in New-York, he becomes the neighbour of a rich man: Mr. Gatsby. This is how Nick gets involved In the relations between the Buchanan's and Gatsby. * Nick has a quite strange relationship with Jordan Backer a GOLF PLAYER, in fact, it can be said that it is a quite ambiguous relationship. ...read more.

Tom Buchanan: * Tom is also from a rich family in the mid-west of the U.S. * He is a big man with pumped up muscles which gives him extraordinary physical features. He is an ex American football player where he played for Haven University. There is where he met Nick Carraway. * Tom, coming from a wealthy family made him a spoiled man. He never really worked in his life which can explain all the days off he has. * Tom is a very selfish man, he has everything he needs, a family, and wants more: Myrtle. Tom uses Myrtle to reach his needs. * He has a relation with Myrtle which he doesn't bother keeping secret. This shows he doesn't care of what others think and has no respect for his wife. * Nick sees Tom as a friendly person at the beginning of the novel but as it goes on, his friendship towards Tom vanishes as it is then followed by Daisy "I couldn't forgive him..." Jay Gatsby: * Gatsby is the main character in this novel. He is plenty of money although it is not quite sure where it all comes from. * Two main things are his objectives for life. ...read more.

* When Gatsby dies, his close friends wouldn't want to come to his funeral because they say that he was a good friend when he was alive for the money but now that he is dead, he has no more money and he can no longer be a friend "Let us learn to show our friendship for a man when he is alive and not after his death". Moral theme: * Nick Carraway is the character which has the most moral values in the whole book. * Nick will remain a friend to Gatsby when he is alive and when he is dead, this shows the great friendship he has towards this man. Another issue Nick will defend about Gatsby is his interest. * F. Scott Fitzgerald presents us the higher class as a careless class in the mid 20's, in fact, Daisy and Tom can be a good example to this. * Every time Daisy and Tom are faced to a problem they will automatically escape leaving no sign whatsoever of where they have gone. An example could be Gatsby's death. When Gatsby died, instead of facing the consequences of his death, Tom and daisy decided to travel. This gives the reader an idea of how selfish and careless towards other people members of the higher class were in the mid 20's. ...read more.