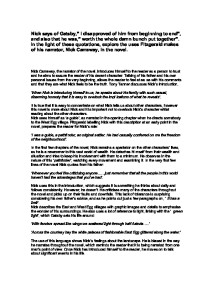 Nick says of Gatsby,&amp;#148; I disapproved of him from beginning to end&amp;#148;, and also that he was,&amp;#148; worth the whole damn bunch put together&amp;#148;.In the light of these quotations, explore the uses Fitzgerald makes of his narrator, Nick Carraway.

Nick says of Gatsby," I disapproved of him from beginning to end", and also that he was," worth the whole damn bunch put together". In the light of these quotations, explore the uses Fitzgerald makes of his narrator, Nick Carraway, in the novel. Nick Carraway, the narrator of the novel, introduces himself to the reader as a person to trust and he aims to assure the reader of his decent character. Talking of his father and his own personal issues from the very beginning, allows the reader to feel at ease with his comments and that they are what Nick feels to be the truth. Tony Tanner discusses Nick's introduction, 'When Nick is introducing himself to us, he speaks about his family with such casual, disarming honesty that it is easy to overlook the implications of what he reveals'. It is true that it is easy to concentrate on what Nick tells us about other characters, however this novel is more about Nick and it is important not to overlook Nick's character whilst reading about the other characters. Nick sees himself as 'a guide', as narrated in the opening chapter when he directs somebody to the West Egg village. ...read more.

These small details stimulate Nick's curiosity. When he finally meets Gatsby, he picks up on Gatsby's use of terrible clich�s and that listening to him was like 'skimming through a dozen magazines'. This suggests that Gatsby has fabricated his past in order to make it seem full of wonder, beauty and glamour. He relives the past and lives the dream. However, Nick also comments on how Gatsby does appear to be telling the truth when talking about the war, with his distinguished and heroic war record. Gatsby continues to talk about his childhood, and Nick knows it is an unoriginal fantasy, but he does want to believe him. Throughout the novel Nick is morally critical of Gatsby and his comment, 'I disapproved of him from beginning to end' supports this. However, despite this, Nick continues to be drawn to Gatsby. Nick perceives two sides to Gatsby. One side is a romantic person with a rare charm, and the other is an uncultured man who adopts a stiffly formal manner to conceal his social faults. He struggles to criticise Gatsby, when through his own morals he knows he should feeling a certain 'shame for Gatsby'. ...read more.

I agree with this comment, and even at one point Nick is said to be, 'Reading over what I have written so far'. Many of the events written about in the novel are not what Nick has experienced, but what others' have recounted and what he has retold. It seems at the start that Nick has been untouched throughout his life. The war hasn't left any marks on him as he enjoyed it so much: 'I enjoyed the counter-raid so thoroughly that came back restless'. It isn't until Nick meets Gatsby that he makes an emotional commitment. He commits himself to a belief in Gatsby even though he is aware of the ugly factors of the man's life. Nick's intuition provides a valuable insight into Gatsby's identity and his vulnerability. It is easy to underestimate the importance of Nick's role in the novel. The title automatically turns our attention to Jay Gatsby, the handsome, wealthy, dreamer who conducts other peoples' lives in order to bypass his own. However, it is Nick's narration and interests that direct the novel in the direction it takes. Tony Tanner's comment about the writer of the book, clearly evaluates the entire novel: 'Fitzgerald's book is Nick's book, but Nick is not Fitzgerald'. Tony Tanner - February 1990 Kathleen Parkinson -The Great Gatsby, A critical study ...read more.