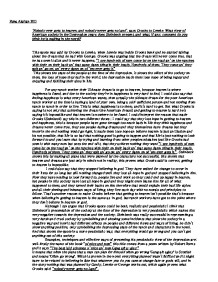 Nobody ever gets to heaven, and nobody never gets no land', says Crooks to Lennie. What view of American society in the Depression years does Steinbeck present, and what, if any, comment do you think he is making in the novel?

Runa Alarian 10D 'Nobody ever gets to heaven, and nobody never gets no land', says Crooks to Lennie. What view of American society in the Depression years does Steinbeck present, and what, if any, comment do you think he is making in the novel? This quote was said by Crooks to Lennie, when Lennie was inside Crooks bunk and he started talking about the dream that he had with George. Crooks was arguing that the dream will never come true, that he has seen it allot and it never happens, "I see hundreds of men come by on the road an' on the ranches with their on their back an' that same damn thing in their heads. Hundreds of them. They come an' they quit an' go on; an' every damn on of 'em ever gets it." This shows the state of the people at the time of the depression. It shows the effect of the society on them, the loss of hope they had in the world, the depression made them lose hope of being happy and enjoying and fulfilling their aims in life. For any ranch worker their Ultimate dream is to go to heaven, because heaven is where happiness is found, and due to the society they're in happiness is very hard to find, I could also say that finding happiness is what every American wants, then actually the ultimate dream for the poor American ranch worker at the time is having a land of your own, being a self-sufficient person and not moving from ranch to ranch in order to live. This is what happiness is to them, and it's hard to get. But what Crooks is saying is not only that achieving the dream (the American dream) and getting to heaven is hard he's saying it's impossible and that heaven is nowhere to be found. I could interpret the reason that made Crooks (Steinbeck) ...read more.

the end where Carlson doesn't know what it feels like to lose a companion saying "Now what the hell ya suppose is eatin' them two guys?" , I think Steinbeck made the reader feel sympathy for both characters , firstly for George for losing a companion (Lennie) and secondly Carlson for not being able to have any sentimentality or sympathy for George this is because he doesn't know what it feels like to have a partner or to care for someone and he cares back. This is very effective because he then makes the reader feel sympathy for two people in two different ways, I think what Steinbeck is trying to point out is that both are victims of society, at the end both have something missing weather it's a friend or a feeling. Carlson acted that way toward both incidents because he was lonely he knew nothing about having a companion and having someone to travel with and care for he was really awkward towards the idea of Lennie and George being together, actually everyone in the ranch was "Well, I never see one guy take so much trouble for another guy." This is what the Boss said when he saw both of them together, "Ain't many guys travel around together," he mused. This was said by Slim. It shows how awkward people thought of this due to the society was very strange if people had partners and had people to be with them in goods and bads in life. A Ranch workers life would be based on moving from ranch to ranch in order to live and they had no aims in life no future to plan to no family to worry about, they spent their salaries on drinks in the town and in whore-houses. This what made this society very harsh, dark and lonely A very effective way of language use to show the loneliness and isolation of the time is the name of the place they're in "Soledad" which means ...read more.

All men lost their dreams but still the characters are cold harsh unsentimental and lack sensitivity towards each other which is proved that the last thing in the novel is says "Now what the hell ya suppose is eatin' them two guys?" it shows that still people are cold and harsh and nothing will get better only get worse. There are some religious morals in the novel as well other than Slims character. Although religion isn't that important in the lives of the ranch workers , we know that because they don't go to church and play and gamble instead but I can argue that this is because they have lost hope in god thinking there is no heaven like there is no god because of all the bad times they have been through and are in. They only mention god through profanity "god damn it " "Jesus Christ" etc. However the description of the dream is idealistic making it seem like paradise there description of the ranch makes it look like heaven on earth it's very lyrical and unrealistic "well it's ten acres .." "were gonna have a little house.." because how can heaven be found in this harsh society which shows the unrealism in it . Its not only George and Lennie that have this "heaven on earth" dream also Curleys wife "coulda been in the movies , an' had nice cloths.." she has her dream to be a movie star and have everything she wanted, it symbolises heaven due to everything you want is found in heave. In most novels the end leads to a conclusion to sum up the whole novel but in this novel what is concluded in the end is actually that what Crooks said is the right thing that no one gets to where they want and happiness and heaven are impossible to reach at the time. This proves Steinbecks point of the society and he was very successful in presenting the themes of loneliness and isolation and using imagery and dialogue to show his negative criticism of the depression through this quote. ...read more.