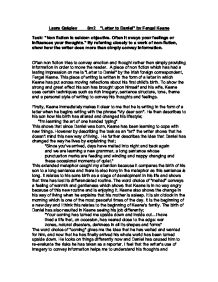 &quot;Non fiction is seldom objective. Often it sways your feelings or influences your thoughts.&quot; By referring closely to a work of non-fiction, show how the writer does more than simply convey information.

Laura Quigley 5m2 "Letter to Daniel" by Fergal Keane Task: "Non fiction is seldom objective. Often it sways your feelings or influences your thoughts." By referring closely to a work of non-fiction, show how the writer does more than simply convey information. Often non fiction tries to convey emotion and thought rather than simply providing information in order to move the reader. A piece of non fiction which has had a lasting impression on me is "Letter to Daniel" by the Irish foreign correspondent, Fergal Keane. This piece of writing is written in the form of a letter in which Keane has put across moving reflections about his first child's birth. To show the strong and great effect his son has brought upon himself and his wife, Keane uses certain techniques such as rich imagery, sentence structure, tone, theme and a personal style of writing to convey his thoughts and feelings. Firstly, Keane immediately makes it clear to me that he is writing in the form of a letter when he begins writing with the phrase "My dear son". He then describes to his son how his birth has altered and changed his lifestyle; "I'm learning the art of one handed typing" This shows that since Daniel was born, Keane has been learning to cope with new things. ...read more.

He describes his son with gentle and innocent images such as "sleeping face" "sigh" "gurgle" "glory" "prizes" and "praise". He then shows the difference between his child's innocence and the suffering that he has seen by using the words "haunted" "too much to bear" and "flooding". This suggests that his change from a personal tone to a more formal tone is because the memories of suffering and the disastrous images are too much for the writer to bear. Therefore he resorts to listing his experiences and becomes less intimate. He changes his tone because he wants to report it in order to detatch himself from the memories. He describes the last story as being a very personal one, however when he goes on to tell it, is tone is still very formal. The story is anonymous and Keane does not reveal until near the end of the story that it was about his own family; "in a big city on a january morning with snow on the ground and a woman" The repetition of the word "a" makes me realise that the writer is being very vague in the story and is distancing himself from emotion. ...read more.

This I feel is one of the most moving sentences in the story and helps me to recognise Keane's universal message of the love bond between parent and child. Daniel has given Keane an understanding of his own father, and at the very end of the letter he describes his son as "the sound of hope" and uses wordchoice such has "innoncence" and "freshness" to show the stark contrast between his child's innocence and the darkness that he previously described. I feel that Keane's choice of theme throughout the letter is very important in conveying his emotions at this time as it shows how important his son is to him. In conclusion, "Letter to Daniel" by Fergal Keane is one of the most touching and moving short stories I have ever read. The writer's use of rich imagery, sentence structure, tone and theme all comes together and helps to convey the writer's thoughts and emotions. He provides the necessary information and also paints vivid pictures of his emotions and if Keane had not used such strong ideas and techniques throughout the letter I am not sure it would have had the same enduring effect on me. ...read more.