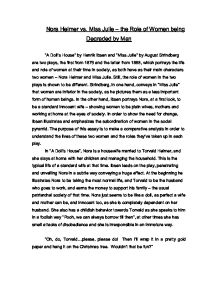 Nora Helmer vs. Miss Julie - the Role of Women being Degraded by Man

Nora Helmer vs. Miss Julie - the Role of Women being Degraded by Man "A Doll's House" by Henrik Ibsen and "Miss Julie" by August Strindberg are two plays, the first from 1879 and the latter from 1888, which portrays the life and role of women at their time in society, as both have as their main characters two women - Nora Helmer and Miss Julie. Still, the role of women in the two plays is shown to be different. Strindberg, in one hand, conveys in "Miss Julie" that women are inferior in the society, as he pictures them as a less important form of human beings. In the other hand, Ibsen portrays Nora, at a first look, to be a standard innocent wife - showing women to be plain wives, mothers and working at home at the eyes of society. In order to show the need for change, Ibsen illustrates and emphasizes the subordination of women in the social pyramid. The purpose of this essay is to make a comparative analysis in order to understand the lives of these two women and the roles they've taken up in each play. In "A Doll's House", Nora is a housewife married to Torvald Helmer, and she stays at home with her children and managing the household. ...read more.

Nora believes that she has been acting throughout her life in order to make other people happy, like Torvald and her father, but now she is no longer carrying this further so she tells her husband everything that she feels. "I have been performing tricks for you, Torvald. That's how I've survived. You wanted it like that. You and Papa have done me a great wrong. It's because of you I've made nothing of my life." The play "Miss Julie" consists of three major characters, Miss Julie being the major one. She is the mistress, with Kristin the cook and Jean her valet. Miss Julie has just suffered from a broken engagement, which was caused by the fact that she wanted to make her husband her little puppy. This engagement problem causes her to advance over Jean, on Midsummer Eve. Other factors also may have caused her to take an action over Jean, like the fact that she has her period, her own nature, the sensual dancing and at last the man. Her mother hates men and therefore she raised Julie to dislike them too and this is why Julie becomes so obsessed to take command over men. "Oh, I'd love to see the whole of your sex swimming in a sea of blood just like that. ...read more.

From the beginning of the play "A Doll's House", it is conveyed that Nora is a wife that is completely manipulated by her husband, Torvald. Nevertheless as we get to know her better it is suggested that Nora isn't as innocent and pure as she looked like. Nora realized that she was living in "a doll's house" and therefore everything was coming to an end so she should search for her individuality. Nora realizes that Torvald isn't devoted to her but to the idea that she is manipulated by him. At this point, Nora has enough courage to leave all her life behind and go after a new start. This suggests two different ideas; first that she was strong enough to go against Torvald and the second that she wasn't so strong as she should have been, because instead of staying and fighting for an importance she decided to run from it. Ibsen sticks with the idea that she runs away from Torvald and from this past life as seen in previous quote. Ibsen also conveys through his play the idea to women that they have a subordinate position in society. The title "Miss Julie" values the Miss Julie as the main element of the play while the title "A Doll's House" gives out the idea of a "doll's family" where everything is perfect but there's no real feelings for each other. Word Count: 1.738 ?? ?? ?? ?? ...read more.

This is an interesting essay and a very difficult subject to write about as there are so many similarities and differences.
There are some errors of expression which make the writer's meaning unclear at times.
Quotes are appropriate but are sometimes too long and although they highlight comments there needs to be analysis of the language used in the quotes.
There is some social and historical context.
Some mature and insightful comments are made.
*** 3 stars.