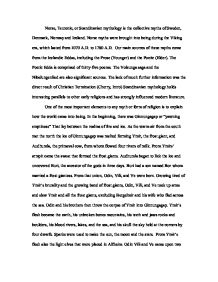 Norse, Teutonic, or Scandinavian mythology is the collective myths of Sweden, Denmark, Norway and Iceland. Norse myths were brought into being during the Viking era, which lasted from 1070 A.D. to 1780 A.D. Our main sources of these myths come from the Icelandic Eddas, including the Prose (Younger) and the Poetic (Elder). The Poetic Edda is comprised of thirty-five poems. The Volsunga saga and the Nibelungenlied are also significant sources. The lack of much further information was the direct result of Christian Termination (Cherry, Intro) Scandinavian mythology holds interesting parallels to other early religions and has strongly influenced modern literature. One of the most important elements to any myth or form of religion is to explain how the world came into being. In the beginning, there was Ginnungagap or "yawning emptiness" That lay between the realms of fire and ice. As the warm air from the south met the north the ice of Ginnungagap was melted forming Ymir, the frost giant, and Audhumla, the primeval cow, from whom flowed four rivers of milk. From Ymirs' armpit came the sweat that formed the frost giants. Audhumla began to lick the ice and uncovered Buri, the ancestor of the gods in three days. Buri had a son named Bor whom married a frost giantess. From that union, Odin, Vili, and Ve were born. ...read more.

(The words of Odin in The Lay of Grimnir) (The Elder Edda 69) By many other names is the All-Father called, yet it would be rude to continue the passage too far. "Like Zeus Odin was the sky father... He is a strange and solemn figure, always aloof...He eats nothing...while other gods feasted Odin pondered what thought and memory taught him." (Hamilton 308) He was responsible for postponing Ragnarok for as long as possible. Thought (Hugin) and Memory (Munin) were the two ravens that went unto the world to observe and return to tell of what all men do, Driven by further search for knowledge, Odin begged Mimir, the wise, to allow him to drink from the well of wisdom, for this he consented to lose an eye. "Wounded I hung on wind swept gallows For nine long nights, Pierced by a spear, pledged to Odin, Offered myself to myself: The wisest know not from whence spring The roots of that ancient rood. They gave me no bread, they gave me no mead: I looked down; with a loud cry I took up the runes and I fell." (The Elder Edda 56) Here we find Odin once more sacrificing himself for knowledge, In The Ultimate Encyclopedia of Mythology it is said that Odin actually died on the gallows of Yggdrasil, that he traversed Nifleheim, or Hel in order to obtain the nine sacred runes, that seem to be extremely powerful as described in The Elder Edda. ...read more.

These works, may well show the effect and legacy of Scandinavian Mythology in the World. Another notable element of Tolkein's Lord of The Rings was his use of the ring itself to the Viings the ring meant wealth honor fame and destiny. It was in fact a tradition to give rings to neighboring countries, bringing to notice the ever prominent focal point of the Lord of the Rings. (Day 29) There is no Heaven or Hell in Scandinavian mythology, the only hope is to be brought up to Asgard by a Valkyrie or "Battle Maiden". Even then those chosen or the Einherjar (The Heroic dead) faced defeat at Ragnarok in the Final Battle on the Vigrid Plain. This may be unlike any other focal point of religion known. It reasons in many ways that the only way to gain honor is to die in battle unfaltering. Scandinavian Mythology, although comparable to other religions or other pagan beliefs is an original and unique work of the Norwegians, Swedish, Icelandic, and Danish peoples of Europe. Hamilton describes it justly by saying, " Asgard, the home of the gods, is unlike any other heaven men have dreamed of. No radiancy or joy is in it, no assurance of bliss, it is a grave and solemn place, over which hangs the threat of inevitable doom...the same is true for humanity...this conception of life which underlies Norse religion, as somber a conception the human mind has ever given birth to...A heroic death...is not a defeat, but a triumph." ...read more.