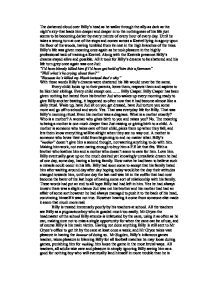 Not having any friends or anyone who cares for him Billy began to spend more time with his Kestrel &quot;Kes&quot;, eventually confiding in Kes, using her to escape the harsh realities of the real world Billy came to love the Kestrel and

The darkened cloud over Billy's head as he walks through the ally-as dark as the night's sky-that leads him deeper and deeper in to the nothingness of his life just seems to be becoming darker by every minute of every hour of every day. Until he takes a wrong turn at one of the stops and comes across a Kestrel lying in agony upon the floor of the woods, having tumbled from its nest in the high branches of the trees. Billy's life was given meaning once again as he took pleasure in the highly professional task of training a Kestrel. Along with the Kestrels presence Billy's dreams stayed alive and possible. All it took for Billy's dreams to be shattered and his life turn grey once again was one Jud: "I'd have bloody killed him if I'd have got hold of him this afternoon" "Well what's he crying about then?" "Because he's killed my Hawk instead that's why" With these words Billy's dreams were shattered his life would never be the same. Every child looks up to their parents, loves them, respects them and aspires to be like their siblings. ...read more.

These words had put an end to all hope Billy had had left in him. Yes he had always known there was a slight chance Jud was not his brother and his mother had had an affair of some sort however he had always managed to push it to the back of his head, convincing himself it was not true. However hearing it come from someone else made it seem that much more real. Billy is treated immensely poorly by his teachers at school. All the teachers see Billy as a pugnacious boy who is goaded much too easily. Mr Gryce-the headmaster of the school Billy attends-is infatuated by the cane, using it as often as he can, making sure not to miss a single opportunity for when the cane can be of use, and of course Billy is his main victim. Having not done anything Billy is still sent to Mr Gryce's office to get hit by the cane at least once a week, and Mr Gryce takes vast pleasure in having the honour of doing so. ...read more.

Knowing how highly unrealistic his much yearned dream was Billy decided not to dwell upon it, and instead found a way out of a impossible dream and in to possible dream worthy reality. Not having any friends or anyone who cares for him Billy began to spend more time with his Kestrel "Kes", eventually confiding in Kes, using her to escape the harsh realities of the real world Billy came to love the Kestrel and see it as a friend. Billy saw the Kestrel as a way out of the low era's of his life hoping to be able to get a job once he had left school as a professional Kestrel trainer, Billy had began once again see the light in his life that was filled with much too much darkness giving it way and letting it in Billy gained hope once again. Aspiring to attempt to make something of his life again Billy's much inflated hopes were once again let down as Jud murdered Kes in revenge for Billy supposedly taking his five pounds. ...read more.