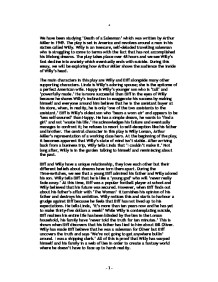 Not only does 'Death of a Salesman' inform the audience about Arthur Miller's opinions on success, failure and dreams

'Death of a Salesman' The Inside Of His Head We have been studying 'Death of a Salesman' which was written by Arthur Miller in 1949. The play is set in America and revolves around a man in his sixties called Willy. Willy is an insecure, self-deluded travelling salesman who is struggling to come to terms with the fact that has not accomplished his lifelong dreams. The play takes place over 48 hours and we see Willy's fast decline into anxiety which eventually ends with suicide. During this essay, we will be exploring how Arthur Miller shows the audience the inside of Willy's head. The main characters in this play are Willy and Biff alongside many other supporting characters. Linda is Willy's adoring spouse; she is the epitome of a perfect American wife. Happy is Willy's younger son who is 'tall' and 'powerfully made.' He is more successful than Biff in the eyes of Willy because he shares Willy's inclination to exaggerate his success by making himself and everyone around him believe that he is the assistant buyer at his store, when, in reality, he is only 'one of the two assistants to the assistant.' Biff is Willy's oldest son who 'bears a worn air' and appears to be 'less self-assured' than Happy. He has a simple dream, he wants to 'find a girl' and not 'waste his life.' He acknowledges his failure and eventually manages to confront it; he refuses to resort to self-deception like his father and brother. ...read more.

The audience know when a Time-switch is about to occur by the change in music, lighting and surroundings. The normal apartment houses that surround the Loman residence are replaced by 'leaves.' The characters no longer 'observe the imaginary wall-lines' and frequently walk through them. Willy is usually talking to himself when a Time-switch is about to happen. Arthur Miller even informs the audience when specific characters are about to enter a scene during a Time-switch. For example, when 'The Woman' is about to come onstage, her distinct laugh is heard. These Time-switches help to show the audience the inside of Willy's head by explaining the problems that he is suffering in the present. For example, they find out about Willy's admiration for his brother, Ben. Ben was a man who repeatedly tells us, 'When I was seventeen I walked into the jungle, and when I was twenty-one I walked out. And by God, I was rich.' Ben gave Willy the chance to go to Alaska with him but Willy decided to stay in America to build in career in selling. It is a decision that Willy deeply regrets in present day, he feels that he missed out on a huge opportunity. This amplifies Willy's obsession with becoming wealthy. As you can see, Time-switches help the audience to understand the characters better. 'Death of a Salesman' tells us a lot about the ideology of the author, Arthur Miller. ...read more.

Through Willy's character, Arthur Miller shows us that he disagrees with this belief. The theme of The American Dream runs through the entire play, Willy is a firm believer in it. At first, this concept seems to be inspirational and advantageous but it is the very thing that kills Willy. This play shows the audience that The American Dream encourages superficial prejudice against those who do not achieve it. This causes pressure and insecurity for those who are not 'rich' and 'well-liked.' It examines the cost of blind faith in the American Dream. Despite being written over fifty years ago, this play is still important and relevant today. The play is a tragedy and many people can empathize with Willy's character. Willy is not superhuman, he is just a man. Moreover, The American Dream is still very much alive today. People flood over from all over the world to come to America to search for fame and fortune, only a few ever achieve it. In conclusion, Arthur Miller allows the audience to see the inside of Willy's by Time-switches and expressing his ideology and beliefs on success, failure, dreams and America. 'Death of a Salesman' addresses the painful conflicts within one family, but it also tackles larger issues regarding American national values. A half century after it was written, this play remains a powerful drama. It is even more relevant today in a world where materialism is such a major problem. There is a part of everyone in the character Willy Loman. Written by Emily Kho ?? ?? ?? ?? - 1 - ...read more.

This essay engages well with the question, looking at how success, failure and dreams shape Arthur Miller's tragedy. There is a good focus here on how Miller allows the audience to understand Willy's dilemma. I would've liked to have seen ...

This essay engages well with the question, looking at how success, failure and dreams shape Arthur Miller's tragedy. There is a good focus here on how Miller allows the audience to understand Willy's dilemma. I would've liked to have seen tragedy been discussed more in this essay, as it is key to Miller's intentions. An exploration of Miller's essay "The Tragedy of a Common Man" would've shown some excellent outside reading to support the arguments here. Sometimes this essay retells the plot rather than analysing techniques, which will gain little credit. Yes, you can analyse the effect of the plot, but at GCSE level it is much more sophisticated to look at how the techniques such as language, form and structure shape meanings and then go on to discuss these in regards to the audience. I was pleased to see a sustained exploration of the audience's response here, as it shows the candidate understand the significance of drama as a medium.

The analysis here is good. As mentioned above, there is sometimes a tendency to retell the story rather than analyse techniques. For example, the majority of the second paragraph adds nothing to the argument other than showing the examiner you know the play well. The analysis of structure begins when the essay comments "At the beginning of the play, it becomes apparent that WillyÃ¢â‚¬â„¢s state of mind isnÃ¢â‚¬â„¢t stable". There is a fine line between narrating and analysing structure, but it's made much clearer when you explicitly talk about Miller using the play to manipulate the audience. For example I would write "Miller makes it clear from the beginning of the play that Willy has a troubled mind, allowing the audience to sympathise with his problems". The analysis of "time-switches" is good, but I would add that Miller himself calls them mobile concurrencies of past and present. It is clear that Miller wants to show the audience Willy's mind is so broken that past and present blur, and so by using this term you'll gain credit from examiners. The contextual evidence here is strong, looking at the materialistic nature that drove Miller to write the play. I just feel it'd be more sophisticated if these comments were linked in with the analysis rather than having a dedicated paragraph.

The essay has an okay structure. The introduction adds nothing to the argument as it simply offers a summary to the play. I would advise you use the introduction to set up a coherent argument, and leave the irrelevant contextual information out. You aren't explaining what the play is to someone who doesn't know - you are arguing towards a question where the reader knows the play inside out, so this should be your focus. Paragraphs are used well, and the clear signposts to begin each point shows a focused argument. Spelling, punctuation and grammar are fine.