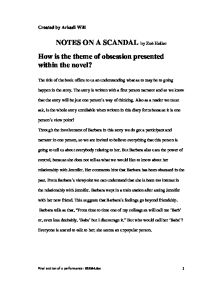 Notes on a Scandal

Created by Arkadi Will NOTES ON A SCANDAL by Zo� Heller How is the theme of obsession presented within the novel? The title of the book offers to us an understanding what as to may be to going happen in the story. The story is written with a first person narrator and so we know that the story will be just one person's way of thinking. Also as a reader we must ask, is the whole story unreliable when written in this diary form because it is one person's view point? Through the involvement of Barbara in this story we do get a participant and narrator in one person, so we are invited to believe everything that this person is going to tell us about everybody relating to her. But Barbara also uses the power of control, because she does not tell as what we would like to know about her relationship with Jennifer. Her comments hint that Barbara has been obsessed in the past. From Barbara's viewpoint we can understand that she is been too intense in the relationship with Jennifer. Barbara wept in a train station after seeing Jennifer with her new friend. This suggests that Barbara's feelings go beyond friendship. Barbara tells as that, "From time to time one of my colleagues will call me 'Barb' or, even less desirably, 'Babs' but I discourage it." ...read more.

It may be that Sheba herself is not entirely honest with Barbara and some elements of truth are lost along the way. An example could be the first kiss between Sheba and the Connolly boy, because there being few aspects of the Connolly business that Sheba has not described to Barbara. In the imagination of the first kiss it has to be the peak of the affair, because this first kiss has got so much energy and satisfaction which can allow every possibility with our feelings in this particular moment. It is situation like this that makes the reader question Barbara's reliability. She talks with authority about situations she has not witnessed. "Certainly, there is no other friend or relative of Sheba's who has been so intimately involved in the day-to-day business of her affair with Connolly". The use of the "intimately" suggests a relationship not a friendship and it's not true - Sheba didn't tell her until she has to. "With my second blow I took the top of the boy's head off cleanly, like an egg". This is an example of symbolism - by breaking the sculpture, Barbara destroys the relationship. She thinks this will bring Sheba to her - showing the depth of her obsession. ...read more.

I've been out on the heath, getting fucked by a sixteen-year-old! What do you think of that?" In spite of her immoral behaviour Sheba oddly wants others to know. At the end Steven Connolly was her target of obsession and Sheba did achieve her aim. She had an affair with a young boy and she was his first lady. "You're my first old lady if that's what you mean". Sheba was infatuated by Connolly's sex appeal and flattered by his attention. We are told by Heller that Barbara is the winner of this novel, but by closely contemplation; what did Barbara get at the end? The burned out wreck of Sheba! Barbara has to look after Sheba, like she is a child: "'Oh?' she said. Her tone was dreamily neutral" also "Then I sat her down and I made us some lunch". So in my opinion Sheba is the winner of this novel, because of her affair with Connolly and after that she got, Barbara as a replacement for Richard: someone to look after her burned-out body without spirit or life. Sheba has fooled everyone, but she didn't expect to end up with broken heart and weaker mind. In appealing to the public for understanding of this non-orthodox relationship, Barbara and Sheba are really appealing to a society who would find a close relationship between them laughable. 1 Final section of a performance: NOTES ON A SCANDAL by Zo� Heller ...read more.