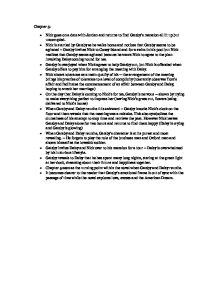 Chapter 5: * Nick goes on a date with Jordan and returns to find Gatsby's mansion all lit up but unoccupied. * Nick is startled by Gatsby as he walks home and notices that Gatsby seems to be agitated - Gatsby invites Nick to Coney Island and for a swim in his pool but Nick realizes that Gatsby seems agitated because he wants Nick to agree to the plan involving Daisy coming round for tea. ...read more.

* On the day that Daisy is coming to Nick's for tea, Gatsby is nervous - shown by trying to make everything perfect to impress her (having Nick's grass cut, flowers being delivered to Nick's house) * When Gatsby and Daisy reunite it is awkward - Gatsby knocks Nick's clock on the floor and then reveals that the meeting was a mistake. This also symbolizes the clumsiness of his attempt to stop time and retrieve the past. ...read more.

* Gatsby invites Daisy and Nick over to his mansion for a tour - Daisy is overwhelmed by his luxurious lifestyle. * Gatsby reveals to Daisy that he has spent many long nights, staring at the green light at her dock, dreaming about their future and happiness together. * Chapter 5 seen as the turning point within the novel when Gatsby and Daisy reunite. * It becomes clearer to the reader that Gatsby's emotional frame is out of sync with the passage of time while the novel explores love, excess and the American Dream. ...read more.