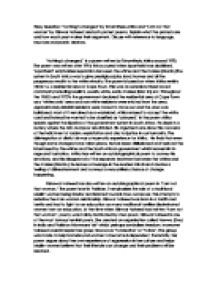 Nothings changed by Tatamkhulu Afrika and I am not that woman by Kishwar Naheed are both protest poems. Explain what the protests are and how each poet makes their argument. Discuss with reference to language, structu

Essay Question: 'Nothing's changed' by Tatamkhulu Afrika and 'I am not that woman' by Kishwar Naheed are both protest poems. Explain what the protests are and how each poet makes their argument. Discuss with reference to language, structure and poetic devices. 'Nothing's changed,' is a poem written by Tatumkhulu Afrika around 1990. The poem was written after 1994; this occurred when Apartheid was abolished. 'Apartheid' emphasises separation between the whites and the masses (blacks.)The system in South Africa was to give prestigious jobs, land, homes and all the prosperous wealth to the white minority. The poem is based on when Afrika revisits District 6, a residential area of Cape Town. This was an extensive mixed raced community including Muslims, Jewish, white, Arab, masses (blacks) etc. Throughout the 1960's and 1970's the government declared the residential area of Cape Town as a 'whites only' area and non white residents were evicted from the area. Approximately 600,000 residents were forced to move out and the area was bulldozed, most of it remained as a wasteland. Afrika refused to accept the white card and instead he wanted to be classified as 'coloured.' In the poem Afrika speaks against the injustice of the government system in South Africa. He depicts a society where the rich and poor are divided. His arguments are about his concerns of the indictment of racism, exploitation and also for justice in our humanity. The disintegration of district six was a traumatic experience for Afrika. He finds that even though some changes have taken place, he has been disillusioned and feels as if he is betrayed by the whites and the South African government which leaves him in rage and frustration. Afrika has written an autobiographical poem to convey his emotions, and his disapproval of the separate treatment between the whites and the masses (blacks.) He leaves a message in the readers minds and creates a feeling of disheartenment and conveys a very unlikely chance of change happening. ...read more.

The poet uses nature to represent her beliefs. "Flowers" could mean fresh, pure, happiness. This indicates that this was what she was willing to share with her husband. "Thorns" suggests that in return, her husband created pain and sorrowfulness in her life. "Embers" illustrates ashes, hot or old. This gives the impression of the long term hate and anger of the inequality between men and women. Afrika is protesting on the separate treatment between the whites and masses (blacks.) The poet explains that "No board says it is" because his recognition of the area is shown through a list of parts of his body, he lists his body parts in the poem to emphasise that his body is the same as everyone else; however he is different from other people because of his colour. Tatumkhulu Afrika feels unwanted even though there is no "board." It is evident in the words "my hands," "skin," "labouring of my lungs" and "the hot, white, inwards turning anger of my eyes." This illustrates that he recognises this place as how it was when he was a young boy. The word "anger" conveys a hot or angry mood because of the ignorant treatment from the whites. Moreover, Afrika feels isolated as he gives the impression that there are white people surrounding him and he is the black bit of his eye (the pupil), the black or coloured part of his eye is being closed down by whites and makes him feel unwanted because they are all surrounding him and he is in the middle. This introduces the first sign of his intense emotion; he knows instinctively that the place he is visiting is District six. "Labouring of my lungs" could possibly convey that he is depressed, angry, in pain, and it brings flashbacks of the memories he had in this particular area. It could also mean that he is living in a restricted lifestyle and feels as if he is trapped or suffocated. ...read more.

It is seen in the words "my loyalty." The tones between "Nothing's changed" and "I am not that woman" are very different. Kishwar Naheed's tone in "I am not that woman" is very calm, but firm. Her steady tone conveys that she has control over what is being said by repeatedly claiming "I not that woman." Tatumkhulu Afrika's tone contrasts compared to Naheeds. In "Nothing's changed" the poet seems to be increasing his rage within each line as he sees more things that have not changed even though Apartheid was abolished. Moreover, he is feeling angry because he had not been to District six for many years. In-conclusion, I believe that Kishwar Naheed in "I am not that woman" argument is stronger as the poem relates more to her lifestyle, cultural beliefs and traditional values about what she has experienced as a woman herself. Naheed clearly explains that wants equality between men and women. Moreover, she does not want to live a typical lifestyle of an asian; and leaves the reader in hope that there is a chance of change. However I believe that Tatumkhulu Afrika argument in "Nothing's changed." Is not as strong as Naheed's as he leaves the reader feeling helpless and has not attempted to change his lifestyle as much as Naheed has in "nothing's changed." Afrika has allowed the whites to treat the masses (blacks) unfairly; because he was not as determined or eager as Naheed. He mainly just agreed how "nothing's changed" however, Naheed believes that no one can stop or change her views. This is why I strongly believe Naheeds's argument is more effective. I believe that Naheed's argument will become more powerful if the majority of women did not accept the cultural beliefs of a submissive Asian housewife and they were all determined to fight for equality. By women taking action as a group by giving their views and speaking; the men may realise that women are treated unfairly, and their lifestyle may change once they have taken action. ...read more.