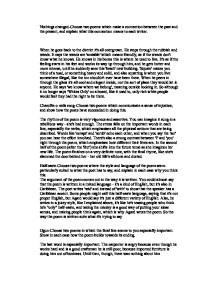 Nothings changed - Choose two poems which make a connection between the past and the present, and explain what this connection means to each writer.

Nothings changed-Choose two poems which make a connection between the past and the present, and explain what this connection means to each writer. When he goes back to the district it's all overgrown. He steps through the rubbish and weeds. It says the weeds are 'amiable' which means friendly, as if the weeds don't know what he knows. He knows in his bones this is where he used to live. It's as if the feeling starts in his feet and works its way up through him, and he gets hotter and more intense, until he suddenly sees this 'brash' new building. 'Squats' makes you think of a toad, or something heavy and solid, and also squatting is when you live somewhere illegal, like the inn shouldn't ever have been there. When he peers in through the glass it's all cool and elegant inside, not the sort of place they would let in anyone. He says 'we know where we belong', meaning outside looking in. So although it no longer says 'Whites Only' on a board, like it used to, only rich white people would feel they had the right to be there. ...read more.

The argument of the poem comes out in the way it is written. You could almost say that the poem is written in a mixed language - it's a kind of English, but it's also in Caribbean. The poet writes 'wid' and instead of 'with' to show that the speaker has a Caribbean accent. Some people might call this half-caste language, saying that it's not proper English, but Agard would say it's just a different variety of English. Also, he writes in a jokey style, like I explained above, it's like he's teasing people who think he's "only" half-caste, and taking the mickey is a good way of putting your ideas across, and making people think again, which is why Agard wrote the poem. So the way the poem is written suits what it's trying to say Ogun-Choose two poems in which the final line seems to you especially important. Show in each case how the poem builds towards its ending. The last word is especially important. The carpenter is angry because even though he works hard and is a good craftsman he is still poor, because imported furniture is doing him out of business. ...read more.

Carving the image puts him back in touch with old traditions of African wood carving and with ancient forests, because the wood itself is 'still tuned to roots and water'. Search for my tongue-Choose two poems which deal with the experience of living between two cultures, and show how this experience is reflected in the language of the poems In English, we use the word 'tongue' to mean 'language' as well as your actual 'tongue'. The poet compares knowing two languages to having two tongues in your mouth, which she calls 'the mother tongue' and 'the foreign tongue'. She is afraid that the mother tongue might shrivel away ('rot and die') like a plant with no roots. But in the last part of the poem, the mother tongue seems to grow back during the night, and 'push the other tongue aside'. It's like when she dreams, she dreams in Gujarati, and this keeps the language alive for her. It connects her to her memories. The image of two tongues growing in your mouth is weird, and a bit disturbing. You can imagine how it would feel. But then it 'blossoms' which also suggests something beautiful. I thought this was a memorable image. ...read more.