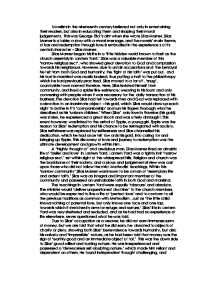 Novelists in the nineteenth century believed not only in entertaining their readers, but also in educating them and shaping their moral judgements. This was George Eliot's aim when she wrote Silas Marner.

Novelists in the nineteenth century believed not only in entertaining their readers, but also in educating them and shaping their moral judgements. This was George Eliot's aim when she wrote Silas Marner. Silas Marner is a fable; a story with a moral message, and the novels' main theme, of loss and redemption through love is embodied in the experiences of its central character - Silas Marner. Silas Marner began his life in a 'little hidden world known to itself as the church assembly in Lantern Yard.' Silas was a valuable member of this 'narrow religious sect', who showed great devotion to God and compassion towards his neighbours. However, due to unfair accusations and the betrayal he felt from both God and humanity, the 'light of his faith' was put out, and his trust in mankind was cruelly bruised, thus putting a halt to the philanthropy which he had previously practised. Silas moved to a far off, 'snug', countryside town named Raveloe. Here, Silas isolated himself from community, and lived a spider like existence; weaving in his loom and only conversing with people when it was necessary for the daily transaction of his business. The devotion Silas had felt towards men and God was replaced with a devotion to an inanimate object - his gold, which Silas would draw up each night to bathe in it's 'companionship' and run his fingers thorough what he described as his 'unborn children.' When Silas' only love in Raveloe (his gold) was stolen, he experienced a great shock and was utterly distraught. This event however, was linked to the arrival of Eppie, a young girl. Eppie was the reason for Silas' redemption and his chance to be reintegrated with society. Silas selfishness was replaced by selflessness and Silas channelled his dedication, which he had once felt towards his gold, into caring for and bringing up Eppie. This discovery of love and journey to redemption was the ultimate development and growth within him. ...read more.

Silas was pondering over the idea of a thief, and as he was suspicious and distrustful of Jem Rodney, Silas thought he was a possible candidate. Silas ran down to the Rainbow, the pub and central meeting place in the village. When the villagers saw him there, they were shocked and thought that they did not see Master Marner, but an 'apparition' of him. Silas gaspingly announced that he had been robbed, and that he suspected Jem Rodney was the one who had stolen him gold. The way the community reacted to this accusation shows the differences between the towns of Raveloe and Lantern Yard. When Silas was accused in Lantern Yard for stealing money, the villagers did not rely on their own judgements and knowledge about Silas' character, but instead drew lots to determine his fate. This shows their strict methods were even more important to the villagers than their own community. In contrast, the people of Raveloe stood by Jem when he was accused, showing that community is very important to the villagers in Raveloe. Silas's decision to inform the Raveloe villagers of his loss let them know that he was not the callous man they pictured him to be. The community were reassured when they realised that 'folks who had the devil in 'em were not likely to be so mushed.' The fact that Silas was so distraught over the loss of his gold, and the thought that he may never be reunited with it caused the villagers to sympathise with him and believe that the 'avoidance of his neighbours, which had before been referred to as his ill - ill to a probable addiction to worse company, was now considered mere craziness.' Unconsciously there was a growth within Silas; due to the loss of his gold, he made contact with people to whom he had never conversed with before, and this made their thoughts concerning Silas 'change to a kindlier feeling.' ...read more.

The moral of this story is that all loss can be redeemed through love and this message is embodied in the experiences of Silas Marner. The community of Lantern Yard caused Silas to become a man with a 'withered and shrunken life' due to the betrayal Silas experiences from both God and mankind. When he arrived in Raveloe, the community was suspicious to start with, but due to the loss of his gold, he gradually became an integral. When Eppie arrived in his life the love which Silas had for her and the joy which she brought rekindled feelings in Silas, and when Eppie married into the community, this sealed their inclusion into society. The three major turning points in his life (being betrayed by God and mankind, the loss of his gold and the arrival of Eppie) caused Silas to experience the good and bad in life. These experiences ultimately made Marner a stronger person than the 'self-doubting' man we are first introduced to in Lantern Yard, both physically and mentally. This allowed Silas to finally open his heart to Dolly and discuss his previous traumatic life, and after Silas had returned to Lantern Yard to confront his past and seen what hit had become, they collectively reached the decision that there were reasons for what happened - reason which were 'dark' to the both of them, but which they knew were necessary for Silas to psychologically grow and to experience life in all its fullness like he did with the help of Eppie. At long last, Silas could change his outlook on life and see that there was 'good in this world.' The love which Silas had for people - especially Eppie, was far greater than his infatuation with gold, and the redemptive power of love which was revealed to him through and by Eppie, saved him from becoming an embittered miserly man until his dying day. ...read more.