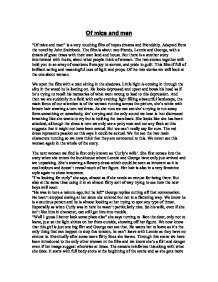 Of mice and men "Of mice and men" is a very touching film of hopes dreams and friendship. Adapted from the novel by John Steinbeck. The film is about two friends, Lennie and George, with a dream of great times with their own land and house. But there is a another story intertwined with theirs, about what people think of women. The two stories together will hold you in an array of emotions from joy to sorrow, and pride to guilt. This film if full of brilliant acting and meaningful uses of light and props. Of the two stories we will look at the one about women. We open the film with a man sitting in the shadows. Little light is coming in through the slits in the wood he is leaning on. He looks depressed and upset and bows his head as if he's trying to recall his memories of what went wrong to lead to this depression. And then we are suddenly in a field with early evening light filling a beautiful landscape, the main focus of our attention is of the woman running across the picture, she's white with brown hair wearing a torn red dress. As she runs we can see she's trying to run away form something or somebody, she's crying and the only sound we hear is her distressed breathing like she wants to cry but is holding the tears back. ...read more.

In this scene we have seen that Curly's wife is as we thought very flirty but that her relationship with her husband might cause this. She next walks into shot again in a flowery dress with a book as Lennie and George are hard at work in a field. In the scene before this Lennie and Curly have a fight. Lennie ends up with a bruised and scratched face and Curly gets a broken hand. "Hi." she says, this is given a glance but they don't reply or give any recognition. "sure is hot out here to day." She try's again to get conversation going. But again they don't care and keep on working. So she try's again. "I said it sure is hot out here." "why don't you go back to your house we don't want no trouble." Says George in a way that says I know I cant force you but I don't want you here. This is of course because of what Curly did. She is taken aback by this, she is used to being ignored but not told to leave by anyone other than her husband. "I just want some one to talk to." She says. "you got a husband, go talk to him" George replies. "yeah I got a husband." ...read more.

Then finally we see her frailty and that she is not just a pair of breasts on legs, she has feeling as well as a mind and emotions. We can conclude that because of the way men see her, causes her to flirt as it's the only way to get any attention. Because she doesn't get the conversation and interaction from Curly she turns else where and flirting is the only way to get that interaction she wants. In the last scene we see her mind, her dreams, opinions and thoughts. we see the side of her that has been ignored by every one just because she's a woman. Through the whole film we don't even get to know her name. But with Lennie these barriers are broken as he doesn't understand them and so she can open up and talk to this person. Even though he might not be listening he isn't blocking her out because she a woman and she gets the interaction that she wants and that she has been searching for. Then finally she dies and we are left with a memory of a woman that showed her mind to us and how she was no longer just a body to be looked at by men. But for a brief moment considered as an individual person. Chris Brooks. ...read more.