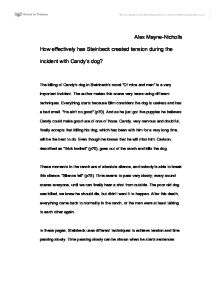 OF MICE AND MEN

Alex Mayne-Nicholls How effectively has Steinbeck created tension during the incident with Candy's dog? The killing of Candy's dog in Steinbeck's novel "Of mice and men" is a very important incident. The author makes this scene very tense using different techniques. Everything starts because Slim considers the dog is useless and has a bad smell. "He ain't no good" (p70). And as he just got five puppies he believes Candy could make good use of one of those. Candy, very nervous and doubtful, finally accepts that killing his dog, which has been with him for a very long time, will be the best to do. Even though he knows that he will miss him. Carlson, described as "thick bodied" (p70), goes out of the ranch and kills the dog. These moments in the ranch are of absolute silence, and nobody is able to break this silence. "Silence fell" (p75). Time seems to pass very slowly; every sound scares everyone, until we can finally hear a shot from outside. ...read more.

Steinbeck also uses a series of short sentences in page 75, just before the smelly dog is going to be killed. "It was silence outside. Carlson's footsteps died away. The silence came into the room. And the silence lasted." (p75) This short sentences makes the reader pause a lot, it suggests that something dramatic is about to happen. It makes everything be very tense, you could just cut the tension with a scissor. In pages 75 and 76 there is a lot of repetition of the word silence. Steinbeck uses this word seven times through the passage. He really wants us to know about the atmosphere in the room, in complete silence. George won't even break himself the stillness by shuffling the cards, but everybody is grateful for things that break the silence. "A little gnawing sound ... all the man looked toward it gratefully." (p75). This silence is personified by Steinbeck "The silence came into the room" (p75). ...read more.

Slim is acting as a sort of judge, because he is trying to please Carlson and at the same time convince Candy about the situation. It is night in this scene and very dark. "Darker'n hell in here" (p70). It shows that something bad is about to happen, and when it is about to happen, or when it gets near, the darker it gets. "Out into the darkness" (p75). The dark sky is invading everything, everyone. Death is near. They can fell it in this atmosphere, were nobody can see clearly. Steinbeck also uses a comparison; at the beginning he compares George and Lennie to Candy and his dog. They are live partners; one of them takes care of the other. They are both friends who love each other and would do everything for his partner. Until now, that Candy accepted to kill his dog believing it would be the best thing to do. He didn't even say good-bye. This might tell us that George will do the same with Lennie, maybe make a new friend, who knows. ...read more.

The question orientates around the focus of Candy and his dog, and how Steinbeck creates tension in the scene where the dog is shot by Carlson. There is a very good focus on the ways in which Steinbeck creates the tension for the reader, with consistent awareness of how the methods he used vary throughout the scene and how they affect both the reader and the other characters. The candidate comments on the linguistic devices as well as the emotions Steinbeck creates.

The Level of Analysis is very good, even though the structure of the essay leads to a repetition of points about the "invasion of silence". The comments made about how Steinbeck manipulates language and his style of writing with the use of short sentences that "makes the reader pause a lot, it suggests that something dramatic is about to happen". However, the explanations of this candidate's points are very basic and have very little insight other than what could be considered obvious. Candidates must go further than what is a general view shown here - how does the use of short sentences affect these character in particular and what does it mean for the rest of the play? These are touched upon later in the answer though, but further analysis could be demonstrated.
The noting of how the use of conjunctions create tension shows an ability to use appropriate terminology when answering the question, as well as an attention to detail about the construction of language Steinbeck uses, because nothing here is coincidental.

The Quality of Written Communication is average. There are a few instance of comma splice (an unnecessary use of comma in a clause that does not require one), and instance where punctuation is omitted, such as question marks ("maybe make a new friend, who know" (sic)").