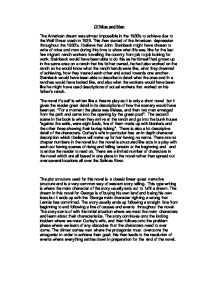 The American dream was almost impossible in the 1930’s to achieve due to the Wall Street crash in 1929. This then started of the American depression throughout the 1930’s. I believe that John Steinbeck might have chosen to write of mice and men during this time to show what life was like for the last few migrant ranch workers travelling the country from job to job looking for work. Steinbeck would have been able to do this as he himself had grown up in the same area on a ranch that his father owned, he had also worked on the ranch so he would know what the ranch hands were like, what they dreamed of achieving, how they treated each other and acted towards one another. Steinbeck would have been able to describe in detail what the area and the ranches would have looked like, and also what the workers would have been like he might have used descriptions of actual workers that worked on his father’s ranch.

The novel it’s self is written like a theatre play as it is only a short novel but it gives the reader great detail in its descriptions of how the scenery would have been set. “For a moment the place was lifeless, and then two men emerged from the path and came into the opening by the green pool”. The second scene in the book is when they arrive at the ranch and go into the bunk house “against the walls, were eight beds, five of them made up with blankets and the other three showing their burlap ticking”. There is also a lot descriptive detail of the characters. Curley's wife in particular has an in depth character description which I believe will make up for her having no name. There are no chapter numbers in the novel but the novel is structured like acts in a play with each act having scenes of rising and falling tension at the beginning and end to entice the reader to read on. There are a limited number of characters in the novel which are all based in one place in the novel rather than spread out over several locations all over the Salinas River.

The plot structure used for this novel is a classic linear quest narrative structure and is a very common way of western story telling. This type writing is where the main character of the story usually sets out to fulfil a dream. The dream in this novel for George is of buying his own land and being his own boss but it ends up with the George main character righting a wrong that Lennie has committed. The story usually ends up following a straight line from beginning to end following a line of causes and events throughout the novel. The story starts of with the initial situation where we meet the main characters and learn about their characteristics. The story continues onto the inciting incident where we meet Curley's wife, and then follows onto the problem phase where we learn of any obstacles that the characters need to over come. The climax comes next where the protagonist must overcome the antagonist in order to achieve their goal; this then leads to the resolution of events where everything settles down in preparation for the end of the novel.

Steinbeck introduces his characters George and Lennie as the two main who has to overcome the antagonist character which is Lennie. The readers will most relate to the character of George because he appears to the reader to be kind gentle hard working. You can tell these traits about him with the way he looks after Lennie and the fact that they move all  over the country together, where as most farm hands travel on there own “guys like us quote”. Lennie is the antagonist of the story he is the character that is stopping the protagonist from succeeding at their dream. Lennie is a child like character who likes to pet nice things and this results in him attacking and killing. We see evidence of this throughout the novel when carry’s a dead mouse round at the beginning which he says he has accidentally killed and then when he kills the puppy given to him by the character Slim. This all ends with him killing Curley’s wife in the barn. This results in George finally overcoming Lennie by killing him.

The character that I have chosen is Curley’s wife she is portrayed as a femme fatale where as I see the character as being more than that. I see that she is a lonely woman looking for attention and someone to talk to as her husband Curley doesn’t speak to her. “Well I ain’t giving you no trouble. Think I don’t like to talk to somebody ever’ once in a while? Think I like to stick in that house alla time”. We here about the character before we actually meet her when Candy is gossiping to George and Lennie about her just after they have met curly he says she is pretty and gives everyone the eye also that she is blamed for everything that goes wrong on the ranch, leading the reader to see her a tart “Well, I think Curley's married….. a tart” when we do meet her later on in that scene she is given an in depth character description. She is described as a girl who is heavily made up full lips, red nails, hair hung in clusters. After George and Lennie have met her George refers to her as jail bait and warns Lennie to stay away from her. This is where we are first given the impression that the dream is going to fail to become reality. Lennie can’t stop starring at her and she leans against the door frame pushing her body forward flirting with them. She says she is looking for Curley which is what she always says. I would say out of all the characters in the book she relates best to slim as he is the only person who doesn’t think that she is a tart. We meet her three times in total in the novel the third time ending in her death thus ending the dream for George and Lennie. The second time we meet her is in crooks room where I she is also heavily made up again she is mean to the guys that are left behind she calls them all a name “nigger, an’ a dum dum, and a lousy ol’ sheep”.

The dialogue that is used after the scene is set is used to help move the story forward and develop the characters. The dialogue used is quite simple to start off with at the beginning and developing into more detailed and heavy the further through the scene we go. The dialogue is also very descriptive of what the character that is being spoken to is doing at that particular moment.  Curley’s wife dialogue is mostly I would say heavy to give the indication that she is a complex character in the story “sure I gotta husban’. You all seen him. Swell guy, ain’t he? Spends all his time sayin’ what he’s gonna do to guys he don’t like, and he don’t like nobody. Think I’m gonna stay in that two-by- four house and listen how Curley’s gonna lead with his left twice, and then bring in the ol’ right cross” the main function of that quote is to say what she thinks of the life that she has got and how she is treated by her husband. The dialogue used by Curley’s wife is mostly about her being a lonely character “I get lonely, you can talk to people but I can’t talk to nobody but Curley. Else he gets mad. How’d you like not to talk to anybody”. She is also sympathetic to Lennie when she learns he has killed his puppy “don’t you worry none. He was jus’ a mutt. You can get another one easy. The whole country is full of mutts”. The main function of this dialogue is that you see she found someone who wants to talk back to her and someone she can talk to who isn’t scared of Curley but Curley is scared of them.

Steinbeck has structured the whole story so that it leads the reader to the expectation of the dream failing for George and Lennie. The novel title is the first clue that we get of this idea as it is taken from the poem to a mouse by Robert burns “But, mousie, thou art not alone, improving foresight may be in vain, the best laid schemes of mice and men, go oft astray and leave us nought but grief and pain, to rend our day”. The next one is what we learn about Lennie liking to stroke and pet nice things, and finding out what happened in weed their last place of employment.  Lennie is the character who is the most dedicated to the dream and he is also the one who expresses it the most, George however supports him. We then find out about the mice that Lennie keeps on accidentally killing before he progresses up to the killing of the puppy in the barn, this leads to the accidental killing of Curley's wife also in the barn. There is also when Carlson shots Candy’s dog in the back of the head which is setting us up for George killing Lennie which is does in exactly the same way. When George is telling slim why they left weed he says “if I was bright, if I was even a little bit smart, I’d have my own little place, an’ I’d be bringin’ in my own crops, ‘stead of doin’ all the work and not what comes up outta the ground” I think means that George does not realty think the dream will ever become reality.

I believe that Steinbeck may well have chosen to write Of Mice and Men at the time he did in 1937 as it was a time when both the story and the reality would have been very similar, as all over America migrant workers were being replaced by machines and it will show what life was like for the remaining migrant workers on ranches. He made the story a tragedy to show that all people dream and that sometimes their dreams will fail. Steinbeck wanted the reader to understand what it was like being a migrant worker on a ranch during the depression and to show how they were treated by the owners. He also wanted the reader to know that everyone dreams of a better life for themselves and that they will strive hard to try achieve it. The story its self does still have some relevance today as there are not enough jobs and so people are still continuing to rely on agencies where they will travel from job to job