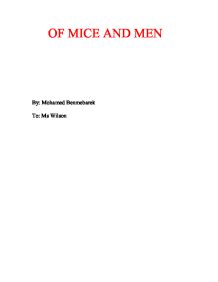 OF MICE AND MEN By: Mohamed Benmebarek To: Ms Wilson OF Mice and Men Introduction: The novel Of Mice and Men by John Steinbeck is Set during the Great Depression in the 1930's in a place called Soledad. When the wall street crash as with the introduction of new machinery led to poverty and unemployment, leaving thousands of workers stranded without work, migrating from place to place searching for some money and a place to sleep. The story Of mice and men starts with a description of the place Lennie and George ended up in after running away from Wead and showed the bad conditions that migrant workers are in. In the novel Lennie and George are the main characters. Lennie is described as a slow and dumb character, while in contrast George is a smart leader and could do much more if he wasn't carrying Lennie along with him all the time. Lennie and George are best friends who travel all over the place together, searching for food, shelter, and some money. In other words they migrant workers. Lennie and George are both similar to the other workers as they are migrant workers but are also unique because migrant workers usually travel alone, but not them they travel together. Lennie and George both have a dream that one day they will own a piece of land. In the novel there are a few themes that teach important life lessons, a few are. "friendship". Friendship is very important in this novel because Lennie and George are rare travelling best friends and throughout the novel their friendship is tested is tested to the limit. ...read more.

No wonder they turn to violence. Paragraph 4. For many Americans at that time the American dream was something to work for and to keep them going, the American dream is the dream of being famous or financially successful or as we saw with the story of Lennie and George it is just wanting to own a piece of land and independence . We first saw the American dream with George and Lennie as they dreamed of one day owning a piece of land. " Someday we're gonna get the jack together and we're gonna have a little house an' a couple of acres and a cow and some pigs...' an live offa the fata da land " explains the dream of George and Lennie and shows the hope that they both have, and dhows us what they both wake up for every morning. Candy is an old character that has been in the ranch for many years, and through those years his dreams got lost, but when he found out of George and Lennie's dream his got revived, " he leaned forward eagerly, spose I went in with you guys thas three hundred an fifty bucks, I'd put in the chicken an hose the garden some, how'd that be" Shows the eagerness and excitement that he was in when he found an opportunity to bring his dream back to life, he also offered all the money he has without thinking twice about it and that shows his determination. Candy is an old man who would like nothing more than some company and a long rest. ...read more.

The colour red is also associated with danger as Lennie tries to avoid her after George warns him, "listen to me you crazy bastard, he said fiercely, don't you even take a look at that bitch, I don't care what she says and what she do" here Curly's wife is associated with danger as George is scared she will get Lennie in trouble. The colour red's association with death also involves Curly's wife as she was killed by Lennie "He looked down at her carefully, he moved his hand from over her mouth and she lay still", Curly's wife had died. Conclusion: The Migrant workers had a difficult life and the didn't make it easier for each other either, in a life full of violence, loneliness and un cleanliness the migrant workers have to struggle in their lives and if you were black at that time then life is even worse for you as racism at that time was very strong, you could say that the only thing that everyone at that time woke up for in the morning are the dreams that they all had, even though most of the dreams never came true and most of the people knew that they still all needed something to wake up to, which teaches us a valuable life lesson which is to always have a dream. I think the theme of the story is that you always need someone to rely one as we've learned from the novella that if you have no one you could go crazy. In conclusion I think this novella shows us how a difficult lifestyle can push friendships to the limit ...read more.