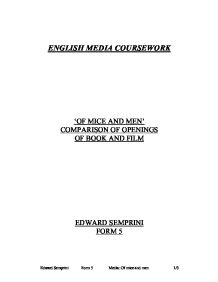 'Of mice and men' - A comparison of the opening scenes of the film and the beginning of the book.

ENGLISH MEDIA COURSEWORK 'OF MICE AND MEN' COMPARISON OF OPENINGS OF BOOK AND FILM EDWARD SEMPRINI FORM 5 Media Course work: Media 'Of mice and men' A comparison of the opening scenes of the film and the beginning of the book 'Of mice and men' is set in southern California at the time of the great depression (late 1920 and early 30's), the basis of the story is about 2 men George and Lenny, who are two workers who travel from place to place finding work on ranches, so they can earn there 50 bucks a month. George is the leader out of the two he looks after Lenny, sorts out where they go and what they do and eat. Lenny is a very big and strong man, but he is very dumb and could not look after himself, he his at heart a nice, harmless man but likes colourful, nice feeling things, so he is just like a small child. Lenny gets them into trouble a lot, he likes to touch nice things and when he does people get the wrong idea and like at the start of the book and film gets accused of rape, and at the end causes a death of a woman. ...read more.

Gary Sinise tries to grab the audience's attention quite differently at the beginning of the film as he uses a dramatic sequence of George and Lenny sitting in the luggage holder of a train, and you see him thinking back to what happened at Weed. When this is happening the light fades over Georges face from the cracks in the compartments wooden walls, this effect of the light streaming across his face gives an imaginary sense of prison bars. During Georges flashbacks you see them running fast and out of breath down a field full of long grass, and it keeps flashing back on Georges face in the train giving you a sense of distress instead of the calming effect of the novel. It then flashes to a pretty woman in a red dress that has a rip going down the bottom of it, the air flows through her dress and hair as she is running down a field. This scene really is exciting and full of tension to the viewer, which contrasts totally to the calm and peaceful opening of the book. Next you she a bunch of workers in a field, and they hear the girl's screams. The workers on horse follow carrying shotguns. ...read more.

This is often shown in the close ups of their faces and in their speech and movement. The clothes they wear are described in the book as workers clothes so rugged and tattered, so the movie is also based on this part as the clothes in the movie are like this. In my opinion I think casting John Malkovich was perfect to be Lenny as he was able to portray the child like brain of Lenny. He seemed to fit the right description of Lenny. The voice used by John Malkovich was very effective in giving the viewer a childlike impression of Lenny. Gary Sinise although he was director he himself played George and he obviously knew how he wanted George to be played and he did with an amazing attitude, he gave out the attitude and cunningness of George as is written in the book. In conclusion, the beginning of the book and the beginning of the film are based on the same storyline. The way the scenes are described and presented are really quite different. Gary Sinise is able to create a sense of action and suspense followed by the calm of the willow pool, whilst Steinbeck creates a very rich and calm descriptive opening scene, which contrasts with the violence of what is actually happening. Edward Semprini Form 5 Media: Of mice and men 1/3 ...read more.