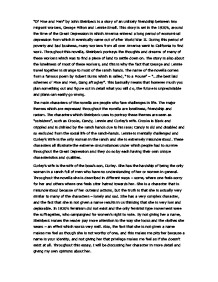 &quot;Of Mice and Men&quot; by John Steinbeck is a story of an unlikely friendship between two migrant workers, George Milton and Lennie Small

"Of Mice and Men" by John Steinbeck is a story of an unlikely friendship between two migrant workers, George Milton and Lennie Small. This story is set in the 1930's, around the time of the Great Depression in which America entered a long period of economical depression from which it eventually came out of after World War II. During this period of poverty and bad business, many workers from all over America went to California to find work. Throughout this novella, Steinbeck portrays the thoughts and dreams of many of these workers which was to find a piece of land to settle down on. The story is also about the loneliness of most of these workers, and this is why the fact that George and Lennie travel together is strange to most of the ranch hands. The name of the novella comes from a famous poem by Robert Burns which is called, "To a Mouse" - "...the best laid schemes o' Mice and Men, Gang aft agley". This basically means that however much you plan something out and figure out in detail what you will do, the future is unpredictable and plans can easily go wrong. The main characters of the novella are people who face challenges in life. The major themes which are expressed throughout the novella are loneliness, friendship and racism. The characters which Steinbeck uses to portray these themes are seen as "outsiders", such as Crooks, Candy, Lennie and Curley's wife. Crooks is black and crippled and is disliked by the ranch hands due to his race; Candy is old and disabled and so excluded from the social life of the ranch-hands. Lennie is mentally challenged and Curley's Wife is the only woman in the ranch and she is extremely misunderstood. These characters all illustrate the extreme circumstances under which people had to survive throughout the Great Depression and they do so by each having their own unique characteristics and qualities. ...read more.

She saw what he had done to the puppy, and he already admitted to her that he ends up killing things that he tries to pet, so she really should have known that if she allowed him to stroke her hair, she would get hurt in the process, the same as all of the other things which Lennie tries to "pet". Curley's Wife is a misfit in a ranch full of men and she is hated by nearly everyone. When Carlson comments to Curley, "Why'n't you tell her to stay the hell home where she belongs?" it shows us what the ranch hands really think of Curley's Wife. They believe her to be a threat in the way of getting their wages and so do not talk to her and when they do, they insult her and are extremely rude towards her. When she asks if Curley's in the bunk house, on the day of George and Lennie's arrival, George speaks to her coldly, whereas he was nice and friendly towards everyone else who came to see him. After meeting her for the first time, George says, "Bet she'd clear out for twenty bucks." I think that what George is trying to say here is that she's a cheap prostitute and that she would do anything for a small sum of money. George has only met her once, he hardly knows her and except for what the other ranch hands tell him, he has nothing to judge her by, yet still he is rude and cruel to her. He calls her "tramp" after meeting her for the first time and then says, "So that's what Curley picks for a wife." This shows that George thinks Curley's wife is an object - "that" is a very strong word in this sentence because you don't use "that" to refer to a person, unless you despise them or think very low of them. ...read more.

She decided to take an easy way out of the situation that she was in and so she got married to Curley, whom she had met on the same day that she had met the actor. It was probably a hasty decision and she probably thought that things could not get any worse, but they did, because Curley turned out to be a paranoid, obsessive and aggressive husband. No one deserves this type of life which is full of hatred and loneliness and so I feel very sorry for her. The "American Dream" is one of the major themes throughout the novella. It states that everyone can achieve success, wealth and security through hard work and effort and most of the characters in the novella admit to dreaming of a better lifestyle. Curley's Wife confesses her desire to be an actor whilst talking to Lennie. She says, "Coulda been in the movies, an' had nice clothes like they wear. An' I coulda sat in them big hotels, an' had pitchers took of me." This makes me feel very sympathetic for her because she, like many of the other characters, she dreams of a better life in which she can progress and improve herself. Tragically she never reaches this dream because she marries Curley and then dies moments after talking to Lennie about her dreams. Her death also brings about the destruction of George and Lennie's dream of having their own ranch where they can do whatever they like. Overall, I think that Curley's Wife is a misunderstood character, but instead of trying to make people understand her so that she, Curley and the rest of the ranch hands can be more comfortable, she reinforces the image that they have of her, making herself an object to nearly everyone. She is sad and lonely with no one to talk to - she thought that marriage would solve all of her problems, however it just left her in a far worse situation that she and many other characters in the novella are not happy with at all. ...read more.