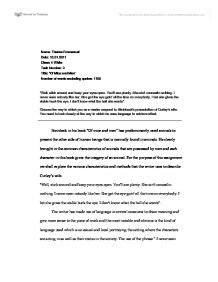 Of Mice And Men Curley's wife

As she continued to look at the men, after provoking them she realized that "all their faces were closed against her" meaning that nobody among all the men were interested in listening to her or hearing anything from her. In her argument with the men she reached a point that she became defensive of her husband, that all the other men were accusing and in that effect she refers to them as "a bunch of bindle stiffs" possibly referring them as people who are quite traditional and against the advice of women and therefore making them feminists. This was a perfect example of similes as under normal circumstances men cannot be compared with bindles. She also goes ahead to compare them with the sheep that are known to be stiff naked. Curley's wife remains a unique character in this book as she is the only woman in the book that is dominated by men and as such she has become a victim of circumstances and is seen to suffer from all kinds of oppression leveled against her by the men. She depicts the negative picture of women in a male sexist society where women have no place and are only known for their destructive tendencies. ...read more.

She also uses flashback in her discussion with Lennie and showing her other side of being a very humble and hospitable lady with a lot of talents and even shows what she could manage if given time. A show came through and I met one of the actors.......... The writer has therefore made use of figures of speech like metaphors, similes, flashbacks and personifications in portraying the characters of Curley's wife and illustrates her as a strong woman who has positively represented women as a whole in the novel, with main emphasis in chapter 4 and 5 of the book. Curley's wife has demonstrated herself as a strong woman who is not willing to negotiate her honesty and true feeling for anything. Her kind nature is clearly brought by the fact that she is willing to listen and understand the problems of the low class citizens of the society like Lennie; who are incidentally grouped in the same category of women and given all sorts of names like infirm, old, rejected, feeble and lifeless; but they are able to develop a unique bond that arises from their circumstances. Therefore Curley's wife represents women as people who are social and can get along with almost everybody, unlike men who lack this trait. Females are therefore lowly rated by males yet they have enormous potentials that even men cannot match. ...read more.

This essay response is directed at a question asking candidates to discuss the character of Curley's wife in John Steinbeck's novel 'Of Mice and Men'. In it, the candidate fairly successfully addresses a number of scenes whereby the character of ...

This essay response is directed at a question asking candidates to discuss the character of Curley's wife in John Steinbeck's novel 'Of Mice and Men'. In it, the candidate fairly successfully addresses a number of scenes whereby the character of Curley's wife is conveyed by Steinbeck's use of metaphors and how Curley's wife interacts with the other characters. Though, almost all their analytical comments are erroneous. Let it no be said that there are right and wrong answers here but if analysis from the candidate clearly juxtaposes the intentions of the writer, then the examiners become aware that the candidate in question lacks sufficient knowledge about the novel and the authorial intentions of it's plot and characters to answer the question with sensible analysis.

There is plenty of analysis here, and the potential for a candidate to receive a strong B grade though, what limits them from doing so is evidence of a lack of proper understanding about the novel. Curley's wife is certainly not symbolic of "women as people who are social and can get along with almost everybody, unlike men who lack this trait", or "a strong woman who has positively represented women as a whole in the novel." This is quite clearly wrong, as Steinbeck wrote Curley's wife as the traditional subordinated woman in a patricarchal society who is stuck on the ranch permanently, with an unnatainable dream that she is oppressed from achieving. Candidates will do well to realise this as it is a key element of the novel.
A further issue preventing this answer from the top marks region is the digression from what the question actually asks. There is a vague appraoch to it, but very little specific detail is offered. The presentation of Steinbeck's language is key to understanding Curley's wife. She is seen as something of a social superior in marriage to Curley but it is she who elevates her status higher than she should, and this is shown in the way she speaks - her dialect and accent are identical to the ranch-hands and this shows her cultural ties with the bottom of society; that she can never hope to improve her situation by actnig more prestigious than she should.

The Quality of Written Communication shown here is average. There are moments when a misuse (or overuse) of the words "just", "basically" and "really" give the answer quite a flippant feel, like the candidate is downplaying Steinbeck's novel, and this should be avoided by ignoring the aforementioned modifiers and writing in a standard grammatical format without colloquialisms.