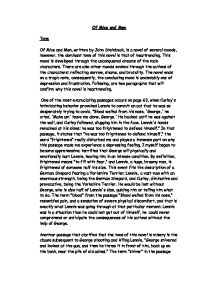 Of Mice and Men Essay

Of Mice and Men Tone Of Mice and Men, written by John Steinbeck, is a novel of several moods, however, the dominant tone of this novel is that of heartrending. This mood is developed through the unconquered dreams of the main characters. There are also other moods evoked through the actions of the characters: reflecting sorrow, shame, and brutality. The novel ends on a tragic note, consequently, the concluding mood is undeniably one of depression and frustration. Following, are two paragraphs that will confirm why this novel is heartrending. One of the most excruciating passages occurs on page 63, when Curley's intimidating behavior provoked Lennie to commit an act that he was so desperately trying to avoid, "Blood welled from his nose. 'George,' he cried. 'Make um' leave me alone, George.' He backed until he was against the wall, and Curley followed, slugging him in the face. Lennie's hands remained at his sides; he was too frightened to defend himself." In that passage, it states that "he was too frightened to defend himself," the word "frightened" really disturbed me and played a immense part on why this passage made me experience a depressing feeling. I myself began to become apprehensive; terrified that George will physically and emotionally hurt Lennie, leaving him in an intense condition. By definition, frightened means "to fill with fear," and Lennie, a huge, brawny man, is frightened of someone half his size. This event fits the description of a German Shepard fearing a Yorkshire Terrier; Lennie, a vast man with an enormous strength, being the German Shepard, and Curley, diminutive and provocative, being the Yorkshire Terrier. ...read more.

Action and plot Someplace beside the Salinas River in western California, two men, George Milton and Lennie Small, are finding their way through the forest to a ranch where they anticipate finding work. George, small and keen, with sharp features, goes in front, while Lennie, a huge shapeless man with a meager mind, but a vast strength, follows him. They are on the hunt for a new job since Lennie, the man with the mentality of a child, has been accused of assaulting a girl, causing them to lose their previous job. Although the story has not really begun, you can already tell that George is like a guardian for Lennie because although only Lennie was accused of rape, George still runs away with him, risking his life too, to the chance of being caught. Lennie loves soft, fuzzy things, and because he unintentionally kills small animals due to the pressure of his huge hands while petting them, George will not allow him to have a pet animal. In mind, Lennie is a very gentle person, however, since he is mentally challenged, he continuously ends up hurting every one around him by not knowing how to express his love and kindness. At times, George feels tempted to go away on his own and leave Lennie, but their lifelong friendship and the devotion of Lennie always reinforced George in his task of acting as Lennie's guardian. Along their way to the ranch, George tells Lennie that if he is ever in any kind of trouble, to go to "the brush by the river" and wait there until he comes, although it is very common for Lennie to get himself into trouble, his response was "Sure George, I'll remember. ...read more.

Another piece of information that I gain knowledge of from this novel is an essential lesson about the nature of human existence. Nearly all of the characters, including George, Lennie, Candy, Crooks, and Curley's wife, admit, at one time or another, to having a intense sense of loneliness and isolation. Each character desires the comfort of an acquaintance, yet, they will settle for the compassionate ear of an outsider. Curley's wife admits to Candy, Crooks, and Lennie that she is unhappily married, "'Sure I got a husban'. You all seen him. swell guy ain't he? Spends all his time sayin' what he's gonna do to guys he don't like, and he don't like nobody.'" Moreover, Crooks tells Lennie that life is no good without a companion to turn to in times of confusion and need. The characters are left helpless by their isolation, and yet, even at their weakest, they seek to obliterate those who are even weaker than they. This brings me to the next theme of this novel, people feeding onto a weaker target. No matter how sad or pathetic someone was, once they found someone weaker than they, instead of comforting them, they put all of their fury and grief into that person, making them feel worse than they already do. The most prevailing example of this brutal tendency is when Crooks criticizes Lennie's dream of the farm and his dependence on George, "'They come, an' they quit an' go on; an'' every damn one of em's got a little piece of land in his head. An' never a God damn one of 'em ever gets it.'" Having just admitted his own vulnerabilities, that he is a black man with a crooked back who longs for companionship, he still tries to point out Lennie's own weaknesses. ...read more.

This response is a little wordy and the points could be made more effectively and concisely in a way that would show a better overall understanding of the novella.
Where apt points are made they are only rarely supported with evidence from the text and the number of quotes included needs to be much higher.