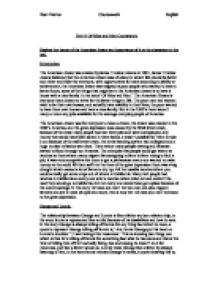 Of Mice and Men. Explore the theme of the American dream and importance of it to the characters in the text.

Unit 2: Of Mice and Men Coursework Explore the theme of the American dream and importance of it to the characters in the text. Introduction The American dream was created by James Truslow Adams in 1931, James Truslow Adams believed that the American dream was of a land in which life should be better and richer and fuller for everyone, with opportunities for each according to ability or achievement, the American dream was targeted at poor people who wanted to have a better future, some of the things that might be in the American dream is to have a house with a nice family. In the book' Of Mice and Men'. The American Dream is everyone has a dream to strive for the better things in life. The poor men and women wish to be their own bosses, and actually have stability in their lives, the poor wanted to have there own homes and have a nice family. But in the 1930's there weren't many or even any jobs available for the average everyday people of America. The American dream was for everyone to have a dream, the dream was created in the 1930's America, and the great depression was caused by the Wall Street crash, because of the crash many people had lost there jobs and were unemployed, any money that would have been saved in there banks, it wasn't possible for them to take it out because of the wall street crash, the entire banking system had collapsed and a huge number of banks went bust. There where many people staving and illnesses started to flood through out America. The only jobs that people could get where at ranches so there where many migrant farmers going to farm to farm trying to find a job, it was very competitive for them to get a job because every one wanted to make money so the could fill them self's in the time of the great depression there was a big drought which caused a lot of farms to dry up. ...read more.

This brings back the point before when someone of something is disabled or can't operate functionally in the environment they get rid of them. Another reason why candy wants to contribute to the dream is because soon when he aint no more there'll be no reason of all that money that he's saved up, so he might as well contribute to something before he dies than have the money go to waste. Steinbeck's purpose in including candy is to show people's attitude in the 1930's towards disabled people. He shows this by comparing the dog to candy; this shows that people treated disabled people as they where worth nothing. The author also shows that if you're disabled you'll be lonely and have no one to be with you, especially if you're some one who hasn't got so much money. Crooks. On the ranch there is much racism towards crooks, through out the story the men on the ranch call him nigger they don't really use his real name, they don't let him join in any of there activities except for the hoarse shoe game which is outside, a quote showing them doing this is," they let the nigger come in the night little skinner name of smitty took after the nigger. Done pretty good to", they use crooks for there entertainment. Crooks is considering to join the dream because he hasn't really got no life here on the ranch no one likes him around because of the colour of his skin the only time he's aloud with other men on the ranch is when they play hoarse shoe, but if they play something else inside the bunkhouse like solitaire they wont let him in. he feels quite lonely on the ranch but trys to hide it when someone comes to his shed he tells them to go away but really he wants them to stay, a quote showing his loneliness is," you got George. ...read more.

Crook also joins in the dream because he is always being left out and he is also treated differently to the rest because he is black, but then later on in the novel he back out of the dream. In the story mice and men Candy dream is to also join in the dream with George and lennie because his dog was too old so they shot his dog and also he is old and he thinks that he is no use to the ranch and wants to be part of their dream he also says that he will do anything but wants to join in with there dream. Curley's wife dream is to become an actress in Hollywood and become very famous show girl. Her dream dins n come true because she lives a lonely life with curly and she isn't treated right with him and people at the ranch think that she is trouble so they decide to stay away from her. He dream didn't get fulfilled because she is promised that she will be a star but then she hears nothing about that promise. In the mice and men story there was a lot of racism towards crooks, he was treated differently from the rest of the men and also he was left out in doing things with the other men on the ranch because of his background. There was also less jobs available so there was competition for the jobs and if they lost their jobs then it would be really hard for them to find another job. Steinbeck's overall view of the America dream is to show life in America in the 1930s.for example how Women were treated unfairly and that were not treated the same as men. America in the 1930s was such a horrible and a cruel world to live in because nobody's dream ever came true and also there was a lot of racism going on back then. ?? ?? ?? ?? Ram Verma Coursework English ...read more.