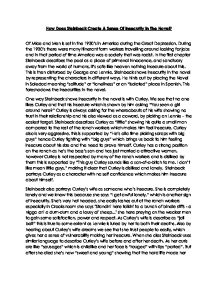 Of Mice and Men. How Does Steinbeck Create A Sense Of Insecurity In The Novel?

How Does Steinbeck Create A Sense Of Insecurity In The Novel? Of Mice and Men is set in the 1930's in America during the Great Depression. During the 1930's there were many itinerant farm workers travelling around looking for jobs and in that period of time America was a society that was racist. In the first chapter Steinbeck describes the pool as a place of primeval innocence, and sanctuary away from the world of humans, it's safe like heaven nothing insecure about this. This is then disturbed by George and Lennie. Steinbeck shows insecurity in the novel by representing the characters in different ways. He hints out by placing the Novel in Soledad meaning "solitude" or "loneliness" or an "isolated" place in Spanish. This foreshadows the insecurities in the novel. One way Steinbeck shows insecurity in the novel is with Curley. We see that no one likes Curley and that his insecure which is shown by him asking "You seen a girl around here?" ...read more.

As Curley's wife is describe as "jail bait" this is true to some extent as Lennie is lured by her to both their deaths. Also by hearing about Curley's wife dreams we see that she trust people to easily, which gives her a sense of vulnerability making her insecure. When she dies Steinbeck uses similar language to describe Curley's wife before and after her death. As her curls are like "sausages" which is childlike and her face is "rouged" with lips "parted". But after she died she's now "sweet and young" showing that the hard life made her mean. Like the mask she was wearing has been stripped away and you can see her innocently. There is a big contrast with this section and when she first appeared in the novel, one that shows at the end she was shown innocently by Steinbeck and all the "ache for attention" was gone away from her face or in other words the insecurity has disappeared from her and now she's at rest. ...read more.

Crooks has also no self confidence in himself because all the ranchers have no respect for him making him insecure about himself. In conclusion I think that Steinbeck shows no solution to loneliness, even though Curley and Curley's wife is married it doesn't stop them from being lonely, Steinbeck shows that loneliness appears to be in every part of human nature and it's something that we cannot escape or change. The novel also ends at the pool where it all began, which is shows now that nature is not so tranquil, and the pond is a place of loneliness fear and death hence its where Lennie was shot. Steinbeck uses nature to reflect the mood of the human world and how the structure suggest that of a life of a itinerant worker in the 1930's in America was a cycle of working and then moving on to the next job. Steinbeck shows the characters as helpless by their isolation and loneliness which leads them being unsecure to one another. ...read more.