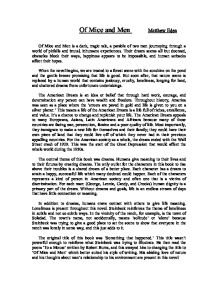 Of Mice and Men is a dark, tragic tale, a parable of two men journeying through a world of pitfalls and brutal, inhumane experiences. Their dream seems all but doomed, obstacles block their ways, happiness appears to be impossible

Of Mice and Men Matthew Eden Of Mice and Men is a dark, tragic tale, a parable of two men journeying through a world of pitfalls and brutal, inhumane experiences. Their dream seems all but doomed, obstacles block their ways, happiness appears to be impossible, and human setbacks affect their hopes. When the novel begins, we are treated to a forest scene with the sunshine on the pond and the gentle breeze promising that life is good. But soon after, that nature scene is replaced by a human world that contains jealousy, cruelty, loneliness, longing for land, and shattered dreams from unfortunate undertakings. The American Dream is an idea or belief that through hard work, courage, and determination any person can have wealth and freedom. Throughout history, America was seen as a place where the 'streets are paved in gold and life is given to you on a silver platter.' This means a life of the American Dream is a life full of riches, excellence, and value. It's a chance to change and replenish your life. The American Dream appeals to many Europeans, Asians, Latin Americans and Africans because many of those countries are facing war, persecution, famine and a poor quality of life. Most importantly, they immigrate to make a new life for themselves and their family; they could have their own piece of land that they could live off of which they never had in their previous appalling countries. For the American society as a whole, the dream ended with the Wall Street crash of 1929. This was the start of the Great Depression that would affect the whole world during the 1930s. The central theme of this book was dreams. Humans give meaning to their lives and to their futures by creating dreams. The only outlet for the characters in this book to rise above their troubles is a shared dream of a better place. ...read more.

In the end, George Milton is man alone once again. Candy's only dream is companionship. In this novel, Candy's only companion is his old dog and his dream is shown through his affection for it. Candy gives Steinbeck an opportunity to discuss social discrimination based on age and handicaps. Candy represents what happens to everyone who grows old in American society: They are let go, canned, thrown out, and used up. Candy's greatest fear is that once he is no longer able to help with the cleaning he will be 'disposed of.' Like his old dog, he has lived beyond his usefulness. Candy's dog serves as a harsh reminder of the fate that awaits anyone who outlives his usefulness. The only thing he is any good at is gossiping about the other people in the ranch and he thinks that this is the only way to impress people or to make friends. Candy and his dog parallel the relationship of George and Lennie. Like Candy's dog, Lennie depends on George to take care of him and show him what to do. Candy, like George, is different from the other ranch hands because he has his dog as a constant companion, someone devoted and loyal to him. When the unfeeling Carlson suggests that Candy's dog be put out of its misery, Candy abdicates the responsibility to Carlson. He told George later that he should have shot his dog himself, foreshadowing George's decision to take responsibility for Lennie's death and 'be his brother's keeper.' Candy also plays a significant role in the dream, providing the money needed to make the down payment. Candy doesn't have any family; he would give all his share of money to George and Lennie to help with the dream. Because of Candy, the dream almost becomes real. His overall dream was shattered right after the death of Curley's wife because he knew that to have this dream complete, he would have to have Lennie because he is the life and enthusiasm of the dream. ...read more.

Her 'best laid plans' involved a stint in the movies with all the benefits, money, and pleasure that would provide. Her beauty is such that perhaps that dream might have come true. Steinbeck seems to show, through Curley's wife, that even the worst of us have our humanity. The pugnacious Curley loves to flaunt his power and status. His dream is explicit, but it is somewhat shown in the novel by his actions of violence. He wants to gain respect from everyone and attain a high status, but he is attempting this the wrong way. He believes the only possible way of achieving his dream is through violence. According to Candy, Curley is an amateur boxer and is always picking fights, especially with guys who are bigger than he is. When Curley picks the fight with Lennie, he does not realise the danger he is in; once Lennie was allowed to fight him, Lennie crushed his hand breaking all his bones. Curley is portrayed as a nasty person. When Lennie killed Curley's wife, Curley saw this as his opportunity for revenge. In his meanness, he told Carlson to aim for Lennie's gut so that Lennie will suffer. This, in turn, caused George to make the decision to kill Lennie mercifully. Dreams were the main theme of this novel. Dreams and fantasies gave hope for every character and it was needed to make life and the misery bearable. Dreams were the characters' only companion which meant that all they hoped for in life was to have a dream. I felt sorry for Curley's wife because she died and never even had a chance to achieve her dream and have a good life. On the other hand, Candy, George and Lennie had a chance to achieve their dream. Steinbeck was successful in trying to show that George and Lennie were the mice in the title and that even mice are seen as a little insignificant. Even 'mice' like George and Lennie were 'men' that had dreams and hopes like everyone else. ...read more.