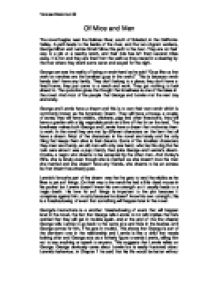 Of Mice and Men. The relationship of George and Lennie.

Of Mice and Men The novel begins near the Salinas River, south of Soledad, in the California Valley. A path leads to the banks of the river, and the two migrant workers, George Milton and Lennie Small follow this path to the river. They are on their way to a job at a nearby ranch, and their ride has left them several miles away. It is hot and they are tired from the walk so they rested in a clearing by the river where they drank some water and stayed for the night. George can see the reality of being a ranch-hand as he said "Guys like us that work on ranches are the loneliest guys in the world." This is because ranch hands don't have any family. They don't belong to a place; they don't have a fixed home; they just come to a ranch and work. ...read more.

Crooks, a negro who dreams to be accepted by the other men. And Curley's Wife, she is lonely even though she is married as she doesn't love the man she married and she doesn't have any friends, she dreams to be an actress but her dream has already past. Lennie's favourite part of the dream was that he gets to tend the rabbits as he likes to pet soft things. On their way to the ranch he had a little dead mouse in his pocket but Lennie doesn't know his own strength so it usually leads to a tragic death. His love for soft things is important to the plot because it conspires against him, mostly because he doesn't know his own strength; this is a foreshadowing of event that something will happen later in the novel. George's instructions is a another foreshadowing of event that will happen later in the novel, the fact that George tells Lennie to ...read more.

And that the truth is that George enjoys having Lennie, as a way out of the loneliness that all the ranch hands felt. George cautioning Lennie introduces the idea to the reader that something bad could happen, or has happened before. The chapter concludes with a description of the sunset. "The deep green pool of the Salinas River was still in the late afternoon. Already the sun had left the valley to go climbing up the slopes of the Gabilan Mountains, and the hilltops were rosy in the sun." This quotation symbolises that we have reach the end of the book. And that George and Lennie's relationship is also reaching an end. In this novel friendship is discussed. The friendship between George and Lennie is incomparable. They trust and rely on each other. Through all the hardships that they've been through, they still managed to pull through it all, that is, until it came to the very end. ?? ?? ?? ?? Vanessa Blakemore :) ...read more.