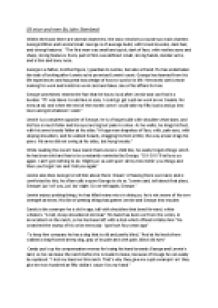 ﻿Of mice and men By John Steinbeck Within the book there are several charterers, the story revolves a round two main charters George Milton and Lennie Small. George is of average build, with toned muscles, dark hair, and strong features?. ?The first man was small and quick, dark of face, with restless eyes and sharp, strong features. Every part of him was defined: small, strong hands, slender arms, and a thin and bony nose. George is a father, brother figure / guardian to Lennie, but also a friend. He has undertaken the task of looking after Lennie as he promised Lennie?s aunt. George has learned from his life experiences and has great knowledge of how to survive in life. He travels with Lennie looking for work and holds his work card and takes care of his affairs for him. George sometimes resents the fact that he has to look after Lennie and can find it a burden. ?If I was alone I could live so easy. I could go get a job an work an no trouble. No mess at all, and when the end of the month come I could take my fifty bucks and go into town and get whatever I want.? Lennie is a complete opposite of George, he is of large build with shoulders that slant, and his face is much fuller and his eyes are big but pale in colour. ...read more.

?I lost my hand on this ranch. That?s why they give me a job swampin? an? they give me two hundred an fifty dollars? cause I los my hand.? Slim is a jerkline skinner, he is tall with long black hair, and large lean hands but is graceful with them. His face was ageless with sharp features, he also uses all of his senses to his advantage to asses any situation, and he also speaks with a slow manner.? His ear heard more than was said to him, and his slow speech had overtones not of thougth, but of understanding beyond thougth.? He is also confident and does not need to show off. Slim has great skill and is good at his job. ?Capable of driving ten, sixteen even twenty mules with a single line to the leaders. He is capable of killing a fly on the wheeler?s butt with a bull whip without touching the mule.? He is wise and carries a presents about him the men on the ranch look up to him and have respect for him, he is knowledgeable on any subject.? His authority was so great that his word was taken on any subject, be it politics or love.? Slim takes control of a periling situation, by offering George a firm leading hand and friendly support, it?s in Slims nature to take control. ...read more.

Else he gets mad? She hangs around the buck house using the excuse that she is looking for Curley. Curley?s wife flirts with the guys on the ranch, giving them the eye, ?I seen her give slim the eye.? She is not liked by the guys, and is often referred to as tramp.?Jesus what a tramp that?s what Curley picks for a wife? Curley?s wife does not like him; she declares this fact to Lennie. ?I ain?t told this to nobody before. Maybe I ought?n to. I don?t like curley? She recalls of once been given the chance to be an actor, but that chance was taken away from her, so she married Curley instead. Within the story of mice and men we learnt about the friendship of two individuals who are so different from one another but still are able to care about each other and form a strong bond between them. Loneliness seems to be one of the biggest fears within the novel; some of us need companionship, in order to survive in life. Steinbeck also shows us that there are many different types of people in life, some people can be kind and show loving others can be horrible and spiteful. The novel taught us that we can all have dreams but sometimes our dreams don?t come true. Life can be unfair, mistakes can be made, and people can be misunderstood. ...read more.