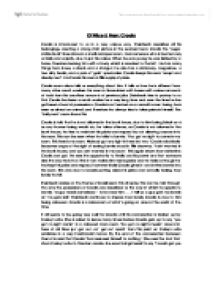 Of Mice & Men: Crooks Crooks is introduced to us in a very unique way. Steinbeck describes all his belongings, creating a strong vivid picture in the readers head. Crooks the 'negro stable buck' lives alone in a small cramped room. He is someone who is treated very unfairly and unjustly, due to just his colour. When he was young he was kicked by a horse, therefore leaving him with a body which is crooked to the left. He has many things from shoes, a clock, and a shotgun; he also has a dictionary, magazines, a few dirty books, and a pair of 'gold' spectacles. Crooks keeps his room 'swept and clearly neat'. For Crooks his room is his supply of pride. Crooks room alone tells us everything about him. It tells us how he is different from many other ranch workers. ...read more.

'I aint wanted in the bunk house, and you aint wanted in my room.' This again shows how defensive Crooks can get. He sees the opportunity to finally use his power and hurt someone else the way he is hurt. This in turn makes him feel superior and he feels as though he has kept his pride and respect, however finally Crooks gives in and invites Lennie into his room. This was due to Crooks putting aside his pride and actually feeling how lonely he felt. Steinbeck carries on the theme of loneliness in this chapter, this can be told through the way the possessions of Crooks are described or the way in which he speaks to Lennie. 'A guy needs somebody - to be near him ... . I tell ya a guy gets too lonely an' he gets sick' Steinbeck continues to impose how lonely Crooks is due to him being coloured. ...read more.

Steinbeck once again describes Crooks doing the same thing once again which he was doing in the beginning 'liniment in his pink hand..... Rubbing his back' I believe Steinbeck is trying to show us something by doing this. He is showing what a black man in those times was to do, no matter what, even if temporarily he found his feet he would always be 'reduced to nothingness'. The American dream plays a huge roll in this book and especially in this chapter. Candy's fear is that what happened to his dog may happen to him for being too old. Crooks fear is that the racism may one day get too extreme for him. George and Lennie's want to be their own boss and live of the 'fatta the lan' as two successful close friends. All these people want to have the dream for these reasons, but however as my favourite poet Jonathon Crannier 'Dreams are there to be dreams , not reality. ' ...read more.

Some good points begin to be explored in this essay; however as a whole response it feels under developed, lacking breadth and depth. Similarities between Lennie and Crooks could have been explored in more detail and even between Curley's wife and Crooks.