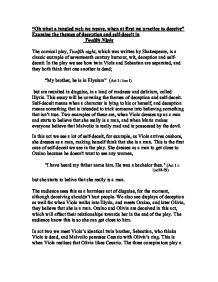 &quot;Oh what a tangled web we weave, when at first we practice to deceive&quot; Examine the themes of deception and self-deceit in Twelfth Night.

"Oh what a tangled web we weave, when at first we practice to deceive" Examine the themes of deception and self-deceit in Twelfth Night The comical play, Twelfth night, which was written by Shakespeare, is a classic example of seventeenth century humour, wit, deception and self-deceit. In the play we see how twin Viola and Sebastian are separated, and they both think that one another is dead; "My brother, he is in Elysium" (Act I i line 1) but are reunited in disguise, in a land of madness and delirium, called Illyria. This essay will be covering the themes of deception and self-deceit. Self-deceit means when a character is lying to his or herself, and deception means something that is intended to trick someone into believing something that isn't true. Two examples of these are, when Viola dresses up as a man and starts to believe that she really is a man, and when Maria makes everyone believe that Malvolio is really mad and is possessed by the devil. In this act we see a lot of self-deceit, for example, as Viola arrives onshore, she dresses as a man, making herself think that she is a man. This is the first case of self-deceit we see in the play. She dresses as a man to get close to Orsino because he doesn't want to see any women, "I have heard my father name him. ...read more.

This again is another case of Viola deciving people by pretending to be someone she is not. At Olivia's house, Malvolio approaches Olivia who is shocked to see what he is wearing and how he is acting towards her, and so Maria declares that he is mad. He is acting this way in responce to Maria's letter, thinking that it was written by Olivia and trying to impress her. "Lo, how hollow the fiend speaks within him" (Act III iv 90) Malvolio shows self-deceit by pretending to be someone that he is not, just to impress Olivia. The audience think that this is a wrong thing to do because he is changing himself for another person and and you shoud be yourself. If that person you are trying to impress doesn't like who you are then you should not be together. Also Maria shows deception because she tells everyone that Malvolio is mad, and Malvolio is being lied to because he is told that Olivia loves him, by being purposely given the letter. In this act, Maria is doing most of the deceiving, because she is telling everyone lies. She tells Malvolio that Olivia loves him, telling Olivia that Malvolio is mad, and telling herself that she is being reasonable in doing this. "Pray god he not be bewitched" (Act 3 iv line 100) ...read more.

The Duke and Viola get married and the play ends with a song from Feste. "When that I was and a little tiny boy, with hey, ho, the wind and the rain..." (Act V I 385) This adds empathy to the scene because it makes the audience feel sorry for Feste because everyone is happy and he isn't. In this act Cesario and show self-deceit because they have their brother/sister in front of them and not know. Sebastain had an excuse, because his sister was in disguise but Viola must be stupid to have her brother in front of her and not recognise him. "Sebastian was my father. Such a Sebastian was my brother to." (Act 5 i line 228) Sebastian shows deception because he makes everyone belive he is Cesario and doesn't say anything to anyone. "As I perceive she does, there's something in't, that is deceivable. But here the lady come" (Act V i ) The effect of this is that everything is resolved and goes back to normal and they all live happily. The audience see this as the final closing point to all the stories come to a close, and is the end of the play. So to conclude, self-deceit and deception do take park in the play Twelfth Night a lot, and become main themes. I don't think that the play would be very good without these themes because they are what make the play good and hold it together. ...read more.