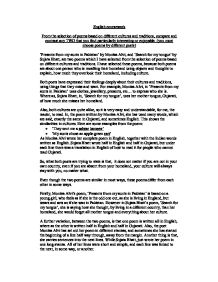 on different cultures and traditions

English coursework From the selection of poems based on different cultures and traditions, compare and contrast any TWO that you find particularly interesting or enjoyable. (you must choose poems by different poets) 'Presents from my aunts in Pakistan' by Moniza Alvi, and 'Search for my tongue' by Sujata Bhatt, are two poems which I have selected from the selection of poems based on different cultures and traditions. I have selected these poems, because both poems are about one person who is recalling their homeland using objects and thoughts to explain, how much they overlook their homeland, including culture. Both poets have expressed their feelings deeply about their cultures and traditions, using things that they miss and want. For example, Moniza Alvi, in 'Presents from my aunts in Pakistan' uses clothes, jewellery, presents, etc... to express who she is. Where as, Sujata Bhatt, in, 'Search for my tongue', uses her mother tongue, Gujarati, of how much she misses her homeland. Also, both cultures are quite alike, so it is very easy and understandable, for me, the reader, to read. In, the poem written by Moniza Alvi, she has used many words, which are said, exactly the same in Gujarati, and sometimes English. This shows the similarities in cultures. Here are some examples from the poem: * 'They sent me a salwar kameez' * 'My aunts chose an apple-green sari' As Moniza Alvi wrote her complete poem in English, together with the Indian words written as English. ...read more.

Moniza Alvi has set this poem, 'Presents from my Aunts in Pakistan' in England, because it is a perfect example of a foreign country, for Pakistan to be compared to. Also, the setting of a poem is very important, as it is the main scene of the poem. Another thing is that, as the poem is set in England, it helps me, the reader to understand what is happening. I also think that England was a terrific idea to set the setting, because in England there are many different types of people, which have come from other countries. This poem shows an example of a normal muslim family, which live in an area which they very familiar with, but like to carry on living as they would in Pakistan. I felt, after reading this poem a couple of times, that there is not one particular mood set to this poem, but there is a mixture of moods. I found that, in some cases Moniza Alvi was showing a sense of sadness, in the atmosphere, but tried to make herself feel happy, by changing the subject slightly. Where as in some cases she showed a lot of happiness and pleasure in the atmosphere. An example of her sadness changing, slightly into happiness is, ' Candy-striped glass bangles snapped, drew blood. ...read more.