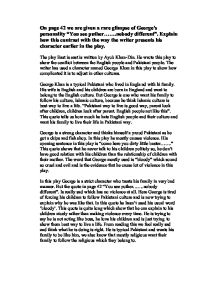 On page 42 we are given a rare glimpse of George's personality &quot;You see puther&amp;#133;&amp;#133;.nobody different&quot;. Explain how this contrast with the way the writer presents his character earlier in the play.

On page 42 we are given a rare glimpse of George's personality "You see puther.......nobody different". Explain how this contrast with the way the writer presents his character earlier in the play. The play East is east is written by Ayub Khan-Din. He wrote this play to show the conflict between the English people and Pakistani people. The writer has used a character named George Khan in this play to show how complicated it is to adjust in other cultures. George Khan is a typical Pakistani who lived in England with hi family. His wife is English and his children are born in England and want to belong to the English culture. But George is one who want his family to follow his culture, Islamic culture, because he think Islamic culture is best way to live a life. ...read more.

But the quote in page 42 "You see puther.......nobody different". Is really sad which has no violence at all. Here George is tired of forcing his children to follow Pakistani culture and is now trying to explain why he was like that. In this quote he hasn't used his usual word 'bloody'. This quote is quite long which show that he can explain to his children nicely rather than making violence every time. He is trying to say he is not acting like boss, he love his children and is just trying to show them best way to live a life. From reading this we feel really sad and think what he is doing is right. He is typical Pakistani and wants his family to be like him, we also know that mostly religious want their family to follow the religious which they belong to. ...read more.

The writer has used same dramatic device which George produce "You see puther, I tell you I buy you watch, is very special it tell you when to pray see in Arabic". The word 'watch' significant that as far as they (children) wear watch, they are belong to George and have to do whatever he say. From this we find that George is trying to put his son in control by giving them less freedom. The writer has set out scene like this to tells how much problem it cause when the people with different accept and different culture live under the same roof. As the character are changed we are meant to change our feelings as well. When George explain to his children what to do and nobody listen to him that time we really feel 'sorry'' for him and at last when he beat his wife and become bossy we feel angry at him. ...read more.