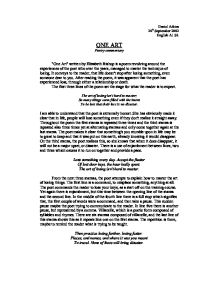 &quot;One Art&quot; written by Elizabeth Bishop is a poem revolving around the experiences of the poet who over the years, managed to master the technique of losing.

Daniel Atkins 20th September 2002 English A1 SL ONE ART Poetry commentary "One Art" written by Elizabeth Bishop is a poem revolving around the experiences of the poet who over the years, managed to master the technique of losing. It conveys to the reader, that life doesn't stop after losing something, even someone dear to you. After reading the poem, it was apparent that the poet has experienced loss, through either a relationship or death. The first three lines of the poem set the stage for what the reader is to expect. The art of losing isn't hard to master; So many things seem filled with the intent To be lost that their loss is no disaster. I am able to understand that the poet is extremely honest. She has obviously made it clear that in life, people will lose something even if they don't realise it straight away. Throughout the poem the first stanza is repeated three times and the third stanza is repeated also three times yet at alternating stanzas and only come together again at the last stanza. ...read more.

None of these will bring disaster. In the third stanza, the poet continues her lecture on the basics of mastering losing things, but requests that losing things is done at a speedier pace as to make it more exciting and cleverer. The wording makes it sound like the reader should be reading quick and fast due to the word "faster", but the poet doesn't want the reader rushing into things and tries to slow you down. In line two the poet has broaden the reader's perspectives by what else one can lose apart from keys like "places, and names" and also the places that the reader has been to in his or her life. There is enjambment between lines eight and nine, but if they were put together like most people would do, the syllables structure would be completely broken, leaving the poem with no continuos flow, or significance. I lost my mother's watch. And look! My last, or Next-to-last, of three loved houses went. The art of losing isn't hard to master. ...read more.

I shan't have lied. It's evident The art of losing's not too hard to master Though it may look like (Write it!) like disaster. At the last four lines, the poet draws the reader into the whole purpose of the poem. The poet tells the reader of someone that she has lost. Probably a close friend who died or even a family member. Now the importance of the loss of the mother's watch and the continents come into play, because the reader now knows that even the loss of all those things can not add up to what the poet has lost in the last stanza. The poet is obviously devastated at the end stanza and decides that she has had enough. The poet demands that the reader fills in the missing gap by adding "Write it!" This is based on the assumption that the reader has completely understood the message the poet is attempting to convey. The poet is at the moment emotionally questioned, as she may have mastered the art of losing, but has not yet mastered the art of holding in emotions. ...read more.