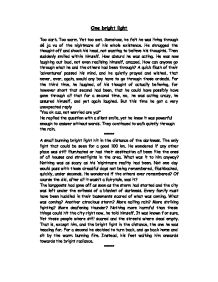 One bright light Too dark. Too warm. Yet too wet. Somehow, he felt he was living through d� ja vu of the nightmare of his whole existence. He shrugged the thought off and shook his head, not wanting to believe his thoughts. Then suddenly smiled within himself. How absurd he was acting. He was now laughing out loud, not even realising himself, amazed. How can anyone go through what he and the others had been through? A quick flash of their 'adventures' passed his mind, and he quietly prayed and wished, that never, ever, again, would any boy have to go through those ordeals. For the third time, he laughed, of his thought of actually believing, for however short that second had been, that he could have possibly have gone through all that for a second time, no, he was acting crazy, he assured himself, and yet again laughed. But this time he got a very unexpected reply "You ok cuz, not worried are ya?" He replied the question with a silent smile, yet he knew it was powerful enough to answer without words. They continued to walk quietly through the rain. ***** A small burning bright light hit in the distance of the darkness. The only light that could be seen for a good 100 km. He wondered if any other place was still illuminated or had their destination all been like the ones of all houses and streetlights in the area. What was it to him anyway? Nothing was as scary as his 'nightmare reality had been. Not one day would pass with those dreadful days not being remembered, flashbacked, quickly, under seconds. He wondered if the others ever remembered? Of course the did, after all it wasn't a fairytale, was it? The lampposts had gone off as soon as the storm had started and the city was left under the evilness of a blanket of darkness. Every family must have been huddled in their basements scared of what was coming. ...read more.

'No Jack 'WHAT! Do not speak my name in such an open place' he said with anger yet passion hanged at the end of each word. 'After all' smiling 'I only want my audience to know of who I am when the mayor himself presents me, and how did you know of my name may I ask?' he looked back up at the blond boy waiting for a reply, none in which he got. ***** He walked off and turned his back on, who he now knew for sure, was Jack, just as his first reaction had told him, he smiled, his instincts hardly ever failed him, especially since his life was broken into a million and one pieces. He approached the identical look-alikes, and actioned with no words, only with a drag on one of their hands and motioned them to follow him, he took them back to where he had left Jack open mouthed and lost. Talking the say walk again, he approached the youngest of them, black, shaggy, untidy hair, was standing talking to a group of boy's about family. But this time, he would have to talk, as it would be impossible to motion with actions, after all, this young boy had not seen him for a good six long years, he must have been sixteen by now he wondered. 'Hi, you are...?' he waved a hand towards Roger in hoping he would get a reply, in which he did. The young boy went red seeing he was being put on the stop, the centre of attention, now that, he knew was not a first. ***** The three boys where talking together, about what else but Jacks placement, typical Jack all right, he had not changed there had he, he pulled a hand through his golden blond hair and introduced Roger to the other three. The twins had relaxed from before, he had noticed, they where more talkative and moving. ...read more.

But how the twin's story had been different from his and Rogers, they had lost both parents in the war, and as soon as the government found out, they had got sent to Australia to live with there great Aunt Ann, and had just recently been allowed to return home. But one thing Ralph still did not understand, was how these three remembered and come to him, he could not leave such a lucky chance in seeing them without asking, could he now? 'but, I don't understand, why when I asked you if you remembered, none of you replied, you when I dropped you my hints indirectly, he gave me blank faces? And how did you remember? What got you to come up to me? I don't understand?' he looked at each boy with somehow, grief. Eric explained how he and his brother where scared, scared of how they thought he'd try and get his revenge on them giving away there hiding place, but did not know he was still as mature as before, well compared to them he was the mature one. When Sam made this point, all the boys laughed together, something they could not remember even doing while at the island. Although, there laughter was cut off quite absurdly by a so known freckled face. ***** 'You little rat...you think by getting half the town on your side you will break me, afraid not you little dumb blonde' although he was cut off his words by a small voice. 'Who are you to talk like that when you are the leading advocate of anarchy and always have been, do not let me bring you out Merridew, you are nothing but a bag of trouble' the boys looked around each other, who's voice was it, because it had definitely not come out of any of their mouths...Jack had turned red, and they all knew what each one was thinking...who had said that??? ...read more.