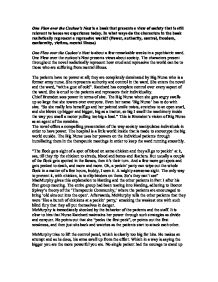 One Flew over the Cuckoo's Nest is a book that presents a view of society that is still relevant to issues we experience today. In what ways do the characters in the book realistically represent a repressive world?

One Flew over the Cuckoo's Nest is a book that presents a view of society that is still relevant to issues we experience today. In what ways do the characters in the book realistically represent a repressive world? (Power, authority, control, freedom, conformity, victims, mental illness) One Flew over the Cuckoo's Nest is about a few remarkable weeks in a psychiatric ward. One Flew over the cuckoo's Nest presents views about society. The characters present throughout the novel realistically represent how cruel and repressive the world can be to those who are suffering from mental illness. The patients have no power at all; they are completely dominated by Big Nurse who is a former army nurse. She represents authority and control in the ward. She enters the novel and the ward, "with a gust of cold". Ratchard has complete control over every aspect of the ward. She is cruel to the patients and repressors their individuality. Chief Bromden sees power in terms of size. The Big Nurse when she gets angry swells up so large that she towers over everyone. Even her name 'Big Nurse' has to do with size. "So she really lets herself go and her painted smile twists, stretches to an open snarl, and she blows up bigger and bigger, big as a tractor, so big I smell the machinery inside the way you smell a motor pulling too big a load." ...read more.

McMurphy tries to lift the control panel, which is clearly too big for him. He makes an attempt and as he does, his arms swell up from the effort. Which in a way is saying the bigger you are the more powerful you are. No single patient had the courage to stand up against the injustices to which they were subjected. McMurphy gave them collective power and a sense that they could resist their prosecutor. Big Nurse controls the patients entirely. Her control over the men is so well done that she can get the men to belittle themselves by silence. She runs group meetings, which are like torture sessions. The men a broken down by the constant questioning of their peers. Everyone does what she wants most of the time, because they are too afraid of her not to comply. McMurphy questions the other patients, particularly Harding, about why they accept Nurse Ratchard power over them, and bets the entire ward that within a week he can force Big Nurse to lose control without gaining control over him. Whether insane or not, the hospital is undeniably in control of the fates of its patients. Although McMurphy's power over Nurse Ratchard eventually ends, his sacrifice serves as an inspiration for the Chief. ...read more.

The black boys are clearly serving the combine in order for revenge of their white oppressors. In the novel the black men are villains because society has victimized them. They are victims of society. Freedom After McMurphy leads the revolt over the baseball World Series, Chief notes that "there's no more fog any place", implying that McMurphy is actually helping to bring sanity to the ward. In other word he is bringing freedom to the other patients. The story is about Chief Bromden's journey from his insanity to sanity. McMurphy helps Chief Bromden find sanity through helping him find his freedom. The novel ends with a climax, Chief Bromden killing McMurphy and escaping from the controlling and powerful environment of Nurse Ratchard's ward. He is free from being controlled and is able to lead a life outside the institution. "One flew east, one flew west, one flew over the cuckoo's nest....goose swoops down and plucks you out". This is a children's song chanted by Chief Bromden's grandmother. McMurphy is the goose who swooped down and plucked the chicks out of the nest- the patients out of a psychiatric ward. Mental Illness The attitude of Nurse Ratchard towards the patients reflects the attitudes of people in society towards mental illness. Most people have very little idea of the life within a mental institution. They do not realize that 'patients' have the same issues as so called 'normal' people compounded by the problems that metal illness causes. ...read more.