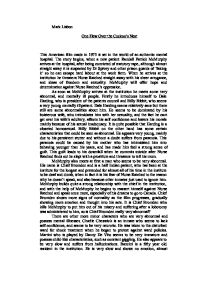 One Flew Over the Cuckoo's Nest.

Mark Lisbon One Flew Over the Cuckoo's Nest This American film made in 1975 is set in the world of an authentic mental hospital. The story begins, when a new patient Randall Patrick McMurphy arrives at the hospital, after being convicted of statutory rape, although almost straight away it is suspected by Dr Spivey and other prison guards of 'faking it' so he can escape hard labour at the work farm. When he arrives at the institution he threatens Nurse Ratched straight away with his sheer arrogance, and ideas of freedom and sexuality. McMurphy will offer hope and determination against Nurse Ratched's oppression. As soon as McMurphy arrives at the institution he meets some very abnormal, and mentally ill people. Firstly he introduces himself to Dale Harding, who is president of the patients council and Billy Bibbit, who seems a very young mentally ill patient. Dale Harding seems relatively sane but there still are some abnormalities about him. ...read more.

It is Chief Bromden who kills McMurphy to put him out of his misery and suffering after a lobotomy was administered to him, so is Chief Bromden really very abnormal? There are other more minor characters who are very abnormal and possess mental illnesses. Charlie Cheswick is an inmate who seems to lack self confidence, and seems to be very neurotic. He was taken to the disturbed ward for shock treatment when he began to protest against ward policies. Martini who is played by Danny De Vito seems to be very immature and possess child-like characteristics, such as constant giggling. He also appears to be very slow and suffers from hallucinations. Bancini is a fifty year old resident in the institution. He is very slow and shows no emotion, almost 'Frankenstein like'. His brain was damaged during childbirth, which may be a reason he constantly complains he is tired. It can also be seen that Nurse Ratched is abnormal. ...read more.

The worst and most harmful way of controlling inmate's behaviour was through the use of electroshock therapy and lobotomies. When getting chest X-rays to check for TB in another part of the hospital, McMurphy learns about the 'shock shop,' where patients get electroshock therapy, and also learns about lobotomies. McMurphy underwent electroshock therapy, which is aimed to cause an epileptic seizure in the brain. The convulsions caused by the shock are supposed to help a mentally ill patient for example by making them more lucid or less aggressive. However since McMurphy was not mentally ill, the shocks would have had an adverse effect on him, but did not dramatically change his behaviour. Indeed McMurphy became a hero, changing the life of the inmates, but paid dearly for his individualism, after a lobotomy was performed on him, a lobotomy is the removal or destruction of the frontal lobe. This is a last option procedure with mixed success. In the case of McMurphy the lobotomy turned him into a vegetable. McMurphy was put out of his misery by Chief Bromden, who then escaped how McMurphy had previously suggested by throwing the control panel out of the window. ...read more.