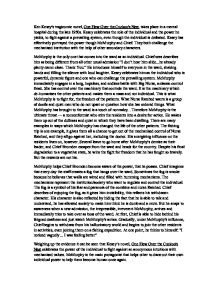 One Flew Over the Cukoo's Nest Essay 2

Ken Kesey's tragicomic novel, One Flew Over the Cuckoo's Nest, takes place in a mental hospital during the late 1950s. Kesey celebrates the role of the individual and the power he yields, to fight against a prevailing system, even though the individual is defeated. Kesey has effectively portrayed the power though McMurphy and Chief. They both challenge the mechanised institution with the help of other secondary characters. McMurphy is the only one that comes into the ward as an individual. Chief sees describes him as being different from all other usual admission "I don't hear him slide...he already plenty damn clean. Thank You." He introduces himself to everyone in the ward, shaking hands and filling the silence with loud laughter. ...read more.

He wakes them up out of the dullness and quiet in which they have been dwelling. There are many examples in ways which McMurphy has changed the life of the other patients. The fishing trip is one example, it gives them all a chance to get out of the mechanised control of Nurse Ratched, and they all go against her, including the doctor. His energizing influence on the residents lives on, however. Several leave to go home after McMurphy's demise as their leader, and Chief Bromden escapes from the ward and heads for the country. Despite his final degradation to a vegetative state, he wins the fight for freedom that he has fought so bravely. ...read more.

But he snaps to awareness when a new admission, the irrepressible, irreverent McMurphy, arrives and immediately tries to take over as boss of the ward. At first, Chief is able to hide behind his feigned deafness and just watch McMurphy's antics. Gradually, under McMurphy's influence, Chief begins to withdraw from his hallucinatory world and begins to join the other residents in activities, even joining them on a fishing expedition. At one point, he thinks to himself: "I noticed vaguely ... I was feeling better" Weighing up the evidence it can be seen that Kesey's novel, One Flew Over the Cuckoo's Nest celebrates the power of the individual to fight against an anonymous intuitions with mechanised values. McMurphy is the main protagonist that helps other to draw out their own individual power to help them become human once again. ...read more.