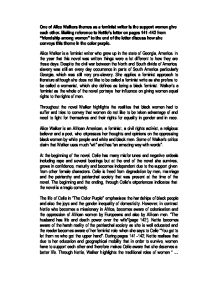 One of Alice Walkers themes as a feminist writer is the support women give each other - Making reference to Nettie's letter on pages 141-142 from &quot;friendship among women&quot; to the end of the letter discuss how she conveys this theme in the color purple.

One of Alice Walkers themes as a feminist writer is the support women give each other. Making reference to Nettie's letter on pages 141-142 from "friendship among women" to the end of the letter discuss how she conveys this theme in the color purple. Alice Walker is a feminist writer who grew up in the state of Georgia, America. In the year that this novel was written things were a lot different to how they are these days. Despite the civil war between the North and South divide of America, slavery was still an every day occurrence in parts of South America particularly Georgia, which was still very pro-slavery. She applies a feminist approach to literature although she does not like to be called a feminist write as she prefers to be called a womanist, which she defines as being a black feminist. Walker's a feminist as the whole of the novel portrays her influence on giving women equal rights to the rights of men. Throughout the novel Walker highlights the realities that black women had to suffer and tries to convey that women do not like to be taken advantage of and need to fight for themselves and their rights for equality in gender and in race. Alice Walker is an African American, a feminist, a civil rights activist, a religious believer and a poet, who expresses her thoughts and opinions on the oppressing black women by white people and white and black men. ...read more.

In contrast the Olinka women undergo much more suffering and oppression than black American women as they are forced into female circumcision and facial scarification for their culture and the patriarchal society in which they live in. One of the themes in "The Color Purple" is the strength and joy women can find in solidarity with each other. They may be powerless in the patriarchal society and in the household but when they integrate they become powerful allies, they also start to believe they deserve better and can work together to improve and stop oppression amongst women. "... Women share a husband but the husband does not share their friendship". Celie has many allies throughout the novel for example Sofia. Celie wishes she could be strong minded and strong bodied like Sofia and speak her mind. "Like going to war...big strong, healthy girl..." (Page 29/30). Often Sofia gives Celie advice and educates her on relationships. As time goes by they become they become extremely close and create the concept of solidarity among women. The concept of making a quilt dramatically emphasises solidarity between women. The quilt is made up of each of several patches sewn together. Each patch represents woman, on its own it is small, weak and insignificant but when together they create a strong unity and a sense of togetherness. This strongly underlines the theme of solidarity between women. Celie also wishes that she could become more like Nettie and be well-educated. ...read more.

The Olkinkan men no longer have omnipotent control therefore the women assert their ideas and their daughters are beginning to be educated which will be passed down through generations. The concept of sisterhood-the support of women for women "...the women are friends and will do anything for one another", highlights and indicates that this concept is something that only women partake in and only women understand. "sisterhood" is about empowering other women and liberating them, it also portrays growth in confidence, love and unity amongst women. The quilt is symbolic to this as it shows history, art and women supporting each other. In order to fight and survive the patriarchal system women have to develop confidence and a voice otherwise they will become invisible. Through the epistolary form Walker allows the reader to hear Celie's voice and the reader can immediately be seen as supporting Celie as we listen to her inner most thoughts. Many critics criticise the realism at the beginning of the novel and the number of co incidents that happen at the end for example Nettie looking after Celie's children after all these years and the happily ever after ending. Other critics objected to the lesbian theme and male violence. They also thought that Walker was trying to divide the black community. In my opinion the critics above are correct. The start is too much to believe that all those bad things could happen to one person and the same goes for the end. It is very unlikely that everything would go exactly according to how Celie had dreamt it. ...read more.