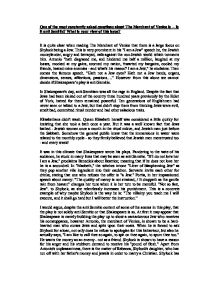 One of the most constantly asked questions about The Merchant of Venice is - Is it anti Semitic? What is your view of this issue?

One of the most constantly asked questions about The Merchant of Venice is - Is it anti Semitic? What is your view of this issue? It is quite clear when reading The Merchant of Venice that there is a large focus on Shylock being a Jew. This is very prominent in his "I am a Jew" speech he, the Jewish moneylender, angry and betrayed, rails against the non-Jewish world which torments him. Antonio "hath disgraced me, and hindered me half a million, laughed at my losses, mocked at my gains, scorned my nation, thwarted my bargains, cooled my friends, heated mine enemies - and what's his reason? I am a Jew," he exclaims. Then comes the famous speech. "Hath not a Jew eyes? Hath not a Jew hands, organs, dimensions, senses, affections, passions...." However from this alone we cannot decide if Shakespeare's play is anti Semitic. In Shakespeare's day, anti-Semitism was all the rage in England. Despite the fact that Jews had been kicked out of the country three hundred years previously by the Edict of York, hatred for them remained powerful. ...read more.

At first it may appear that Shakespeare is merely building the play up to show a cantankerous Jew who receives his comeuppance, however Antonio, the merchant of Venice, is shown to be a hard-hearted man who curses Jews and spits upon their coats. When he is forced to ask Shylock for a loan, not only does he refuse to apologise for this behaviour, but also he actually says, "I am like to call thee so again, to spit on thee again, to spurn thee too." He wants the money as an enemy - not as a friend. Shylock is shown to have a reason for his anger and his stubborn demand to receive his "pound of flesh." Apart from Antonio's unpleasantness, there is the matter of Rebecca, Shylock's daughter, who has run off with her father's money and jewels in order to marry a Christian. Shylock has a motive for hating Christians and their double standards. In this way the play actually shows both sides of the coin, that Christians have the potential to be bad just as well as Jews. ...read more.

In conclusion, Shylock shows some of the characteristics of a villain, but these are simply products of his victimisation; Shylock is a victim of the self-absorbed, racist community that Venice had become. His anger and frustration that lead to him making poor judgements are products of having to endure the torment of this environment. An Elizabethan audience would probably harbour a little sympathy for Shylock because of the way the Christians persecute him but however hard Shakespeare has tried to even out the playing field with regards to the portrayal of Jews in a bad light, the audience would of probably left the theatre with their anti Semitism intact or inflamed. Viewing the play through modern eyes, Shylock can be seen as both an Elizabethan stereotype but also a human being. Ironically, it is precisely because of the stereotypical elements in Shylock's character that many people argue against The Merchant of Venice, viewing it as an anti-Semitic work, which is an understandable reaction in a post-Holocaust era. Shakespeare, however rarely creates a one-dimensional villain, but a complex character who usually has many lessons to teach the audience. ...read more.