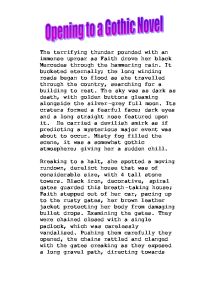 Opening to a Gothic Novel.

The terrifying thunder pounded with an immense uproar as Faith drove her black Mercedes through the hammering rain. It bucketed eternally; the long winding roads began to flood as she travelled through the country, searching for a building to rest. The sky was as dark as death, with golden buttons gleaming alongside the silver-grey full moon. Its craters formed a fearful face; dark eyes and a long straight nose featured upon it. He carried a devilish smirk as if predicting a mysterious major event was about to occur. Misty fog filled the scene, it was a somewhat gothic atmosphere; giving her a sudden chill. Breaking to a halt, she spotted a moving rundown, derelict house that was of considerable size, with 4 tall stone towers. ...read more.

They had ears like an elephant, a devils bloodcurdling tail along with 4 teeth as sharp as carving knives; eyes the shape of a lemon. Feelings of nervousness overcome her as she climbed the stairs, careful not to slip. She could taste the fierce salty raindrops as they trickled down her ice-cold face. Her heart was pounding as fast as a rocket. After much consideration and caution, she gathered the courage to knock against the neat wood door. A sun carved neatly in the centre, Greek patterns boarding the edges of it. A window located at each side of the door, containing circles of stained glass filled with red, blue and green. She stood stiffly, waiting for a reply. ...read more.

A murderous dagger, ready to strike was created, fresh blooded dripped from its sharp point. Faith quivered with fright. The vast shadowed ceiling was shaped into a snail shell spiral in which a menacing chandelier hung from the centre. Light from a nearby flame torch reflected from the diamonds draped from the chandeliers golden brass frame. Cobwebs completely covered it. The reflections on the blood red wall formed fascinating shapes. The brass frame curved away from its body, with dancing arms, odd figures were engraved onto them. The Staircase looked strange with a curved shape, looking like a lock of black curled hair with a vibrant vivid red ribbon. The harsh wood was polished with a great glowing finish. The door slammed suddenly shut behind her, there was no turning back now. She darted around at the speed of lightning as she heard a puzzling cracking sound. ...read more.