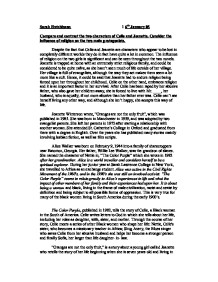 ORANGES ARE NOT THE ONLY FRUIT Compare and contrast the two characters of Celie and Jeanette. Consider the influence of religion on the two main protagonists.

Sarah Hutchinson 16th January 05 Compare and contrast the two characters of Celie and Jeanette. Consider the influence of religion on the two main protagonists. Despite the fact that Celie and Jeanette are characters who appear to be lost in completely different worlds they do in fact have quite a lot in common. The influence of religion on the two girls is significant and can be seen throughout the two novels. Jeanette is trapped at home with an extremely strict religious family, and could be considered to be quite na�ve, as she hasn't seen much of life outside of her village. Her village is full of evangelists, although the way they act makes them seem a lot more like a cult. Hence, it could be said that Jeanette had to endure religion being forced upon her throughout her childhood. Celie on the other hand, embraces religion and it is an important factor in her survival. After Celie has been raped by her abusive father, who also gave her children away, she is forced to live with Mr. ____, her husband, who is equally, if not more abusive than her father ever was. Celie can't see herself living any other way, and although she isn't happy, she accepts this way of life. Jeanette Winterson wrote, "Oranges are not the only fruit", which was published in 1985. She was born in Manchester in 1959, and was adopted by two evangelist parents. She left her parents in 1975 after starting a relationship with another woman. ...read more.

Jeanette doesn't appear to have much of a relationship with her dad, her mum however is quite abusive in the way in which she speaks to her daughter, and the ways in which she gives her comfort, i.e. gives her an orange to peel instead of a hug. The difference between her mother and father can be seen at the beginning of the story, Jeanette here could be suggesting that her father much prefers to stand back and watch, where as her mother is more the type to become really involved in something, such as her love for the church. The influence of religion on Jeanette is much stronger than it is on Celie. It is very much Jeanette's life and has an influence in everything that Jeanette says and does "'God's in everything'". Social aspect could be seen as the influence here. Jeanette lives in a world completely surrounded by people who are all in favour of and worship God and it could be considered that she is in a way brainwashed by this. Their extreme beliefs make them appear that this is the norm, and Jeanette is in turn indoctrinated by it all and accepts the situation for what it is. In the early parts of the novel, Celie sees God as her listener and helping hand, yet Celie does not have a clear understanding of who God is. She knows deep down that her image of God as a white patriarch "don't seem quite right," but she says it's all she has. ...read more.

Celie tells her story through private letters that she writes to God. Therefore, Celie narrates her life story with complete candour and honesty. As a poor African-American woman in rural Georgia in the 1930s and a victim of domestic abuse, Celie is almost completely voiceless and disenfranchised in everyday society. However, Celie's letters enable her to break privately the silence that is normally imposed upon her. It is her voice and form of escape. It can be concluded that religion for both girls is quite significant. It is an important factor in the way in which it helps to shape both of their lives. The two manage to escape their old lives and start afresh, with God remaining a strong influence upon them. Celie acknowledges her newfound self and her new life by ending her letters as if they were a prayer, with the word "Amen." Jeanette has escaped her demons and eventually returns home once she has found her own path in life with God, but without all her previous restrictions. The two novels reflect on the ways in which religion can affect how a person lives their life, and how it can help them to cope in times of need and desperation. The novels also show how religion can have the influence to help a person to have the strength to survive and completely change their direction in life, as is seen in "The Color Purple" and "Oranges are not the only fruit." 1 "Oranges are not the only fruit" Jeanette Winterson Chapter One, Genesis. In this scene we are introduced to Jeanette, her family and the life she lives. ...read more.