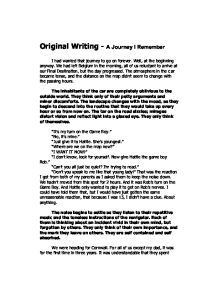 Original Writing - A Journey I Remember

Original Writing - A Journey I Remember I had wanted that journey to go on forever. Well, at the beginning anyway. We had left Belgium in the morning, all of us reluctant to arrive at our Final Destination, but the day progressed. The atmosphere in the car became tense, and the distance on the map didn't seem to change with the passing hours. The inhabitants of the car are completely oblivious to the outside world. They think only of their petty arguments and minor discomforts. The landscape changes with the mood, as they begin to descend into the routine that they would take up every hour or so from now on. The tar on the road sizzles; mirages distort vision and reflect light into a glazed eye. They only think of themselves. "It's my turn on the Game Boy." "No, it's mine." "Just give it to Hattie. She's youngest." "Where are we on the map now?" "I WANT IT NOW!" "I don't know, look for yourself. ...read more.

It was understandable that they spent most of the long hours lecturing us on manners while we were caged in the car- we had to make a good impression. They were our family though. Should we really have to make an impression on them? Aren't they supposed to know us better than we even know ourselves? Sometimes things aren't what they are assumed to be though. They suspect the feeling of awkwardness that undercurrents their arrival. It will be smothered by joviality, present giving and drink. Concern for each other's appearance makes them interfering. Hills roll past, and the malicious sun is shining straight down onto the car holding them like packed vegetables. Slowly the car crawled down the stretch of motorway, which the sun was slowly melting. The car had been a sanctuary from the heat at the beginning of the journey, but now we could feel the effects of it. The angrier and more frustrated we got the warmer the car grew. ...read more.

We always listened to Queen and Van Morrison on long car journeys. Everything seems to merge together after a while though, just drowning out the sound of the car. And each other. They are separate and isolated from each other as though in separate cages. They expect no communication. They give none. They can only think ahead. By the time that there was only about an hour to go of this pain staking driving we were all looking forward to Cornwall like it was the Promised Land. Every accident was forgotten. We only remembered the food and drink we would be given, the early Christmas and late birthday presents. We were just coming up the drive of the house when the door opened and every single relative I remember, some that I didn't remember, and some that I didn't even know came swarming down the drive. Within minutes we were all crowded round a huge dining table, ready to begin. The accidents were forgotten. They had successfully implanted themselves in this household. They would not let it out of their grasp until they left exhausted and overfed, to return to their mundane routine of work. Believing that they had had a holiday. ...read more.