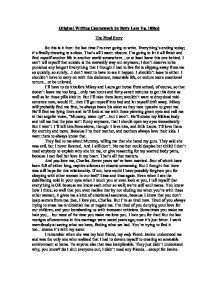 Original Writing Coursework by Betty Lam Vo, 10Red The Final Entry So this is it then: the last time I'm ever going to write. Everything's ending today; it's finally drawing to a close. That's all I want: closure. I'm going to let it all finish and find myself another life in another world somewhere...or at least leave this one behind. I can't tell myself that suicide is the cowardly way out anymore; I don't deserve to be punished any longer! Everything that I thought I had to live for is slipping away from me so quickly, so surely...I don't want to have to see it happen. I shouldn't have to either. I shouldn't have to carry on with this dishonest, miserable life, or endure more emotional torture...or be unloved. I'll have to do it before Mikey and Laura get home from school, of course, so that doesn't leave me too long...only two hours and forty-seven minutes to get this done as well as let those pills kick in. But I'll take them later; wouldn't want to drop dead mid-sentence now, would I?...then I'll get myself into bed and let myself drift away. Mikey will probably find me first, he always beats his sister as they race upstairs to greet me. He'll find me lying there and he'll look at me with those piercing green eyes and call me in that angelic voice, "Mummy, wake up!"...but I won't. ...read more.

I remember when she was my best friend, my only friend. Janine understood me and was the only one who realized that I had to devote myself to creating an amicable environment at home. To anyone else that was inexplicable. They just didn't understand why, you know? So I shut everyone out; I didn't need any friends...except for Janine. She lived with me, she experienced what I did with Mummy. She knew why I sought change so necessarily. Now I realize that it was all an act; she never cared about me. All she wanted was to get inside my head and figure out the way I thought so she could steal what was mine. I hate her! She's my sister, how could she do this to me? Why don't you take my place once I'm gone, Janine? Step into my shoes and get Mikey and Laura to call you 'Mummy'! Sleep with MY husband in MY bed and live MY life, why don't you! I know you're ashamed, Janine- you can't look me in the eye anymore, especially if Charles is around. Your face turns pale as soon as you catch my glance; I know you can feel how much I loathe you. I hate everything about you, especially the way Laura adores you. If only she was just acutely aware of the fact that her precious Aunty Jan was trying to split up her family. I'll never forgive you for this. ...read more.

But now it has turned into anger and I don't know how to handle it. I don't want to give in, but I don't think there's any love left in our marriage. He has become like everybody else: always patronizing me, always hurting me! They must enjoy trying to make me lose my mind and even my children. That's what they want, I know it. I didn't think that a mother could love her kids too much, but apparently I need to let go, as Jan tells me. As if I'd ever listen to her! Charles does, though. He says the exact same thing- see, she's got him wrapped around her little finger and soon she'll get my little Mikey and Laura. And as much as I deny that it could happen, deep down I know it will. It scares me so immensely to think that I've lost control of my own life, and that thought in itself is killing me. I'd rather go now and die knowing that they love me with all their hearts and that they're mine. Charles might even realize that he still loves me, like he once displayed so freely. He'll let happy moments of us remain embedded permanently in his mind, and he'll treasure them...even if he is with Janine. She has won; she wants to have my life and now she'll get it. It's because of her that I was forced to make this choice of living or dying. Just don't expe ...read more.