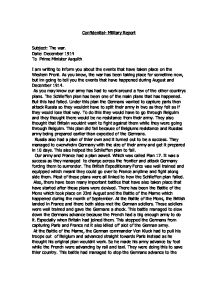 Confidential- Military Report Subject: The war. Date: December 1914 To Prime Minister Asquith I am writing to inform you about the events that have taken place on the Western Front. As you know, the war has been taking place for sometime now, but im going to tell you the events that have happened during August and December 1914. As you may know our army has had to work around a few of the other countrys plans. The Schlieffen plan has been one of the main plans that has happened. But this had failed. Under this plan the Germans wanted to capture paris then attack Russia so they wouldnt have to split their army in two as they felt as if they would lose that way. To do this they would have to go through Belguim and they thought there would be no resistance from their army. They also thought that Britain wouldnt want to fight against them while they were going through Belguim. This plan did fail because of Belgiums resistance and Russias army being prepared earlier than expected of the Germans. ...read more.

These soldiers were well trained and gave the Germans a shock. This battle managed to slow down the Germans advance because the French had a big enough army to do it. Especially when Britain had joined them. This stopped the Germans from capturing Paris and France nd it also killed off alot of the German army. At the Battle of the Marne, the German commander Von Kluck had to pull his troops out of Belgium and advanced straight towards Paris instead as he thought his original plan wouldnt work. So he made his army advance by foot while the French were advancing by rail and taxi. They were doing this to save thier country. This battle had managed to stop the Germans advance to the River Marne, but i didnt get the Germans out of France entirerly. The Germans new they couldnt break through the enemy lines so they changed their commander to Falkenhayn who tried to get his troops around the enemy lines. This was so they could capture ports on the edge of the country. ...read more.

They also know that the war wont be over for several months or years now, so they are beginning to be sad and less enthusiastic about the outcome. They are also like this as they have lost many people during the months of October and November this year. I personally think that the war wasnt over by this Christmas because of the plans that have been devised have made the troops have to change where they are and what they are doing at that certain point. I also think it isnt over because of the amount of soldiers that have died were needed for the rest of the battles, even though they fought well. I think that if the troops carry on fighting the way they have been fighting in the last few months or so, the war will be fought in the same way but i think there will be alot more casualties than the previous battles that have been fought around certain countries. I also think its going to be alot harder now there have been trenches built dividing the two sides and will separate the fighting which will make it better. Jordan Peacock 10Y ...read more.