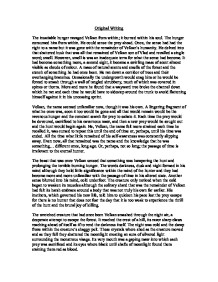 Original Writing - The insatiable hunger ravaged Velkan from within; it burned within his soul.

Original Writing The insatiable hunger ravaged Velkan from within; it burned within his soul. The hunger consumed him from within. He could sense the prey ahead. Once, the sense had had the right to a name but it was gone with the remainder of Velkan's humanity. He delved into that shattered husk that was all that remained of Velkan son of Vlad and recalled a single word; smell. However, smell is was an inadequate term for what the sense had become. It had become something more, a second sight, it became a swirling mass of scent almost visible as clouds of colour. A mass of natural scents and smells of the forest and the stench of something he had once been. He ran down a corridor of trees and their overhanging branches. Occasionally the undergrowth would snag him or he would be forced to smash through a wall of tangled shrubbery, much of which was covered in spines or thorns. More and more he found that a wayward tree broke the channel down which he ran and each time he would have to sidestep around the trunk to avoid flattening himself against it in his unceasing sprint. Velkan, the name seemed unfamiliar now, though it was his own. A lingering fragment of what he once was, soon it too would be gone and all that would remain would be the ravenous hunger and the constant search for prey to satiate it. ...read more.

From within Velkan recognised that he had taken another step towards the path of the beast. The body responded without command from Velkan's failing mind and picked itself up. There was no conscious thought that propelled the monstrosity towards the unsuspecting prey once more. Deep within the remains of Velkan's mind forced one final conscious thought into being, he would never see truly see anything other than the prey ever again. The terrain was all but invisible now; the trees and foliage little better than the deep grey of the hills, navy blue and darker even at the centre. A stark contrast to the local wildlife that now burned with a light that could pierce even rock, a deep rich red. How he longed to extinguish those lights, to satiate his hunger for a momentary respite. However, he had chosen his intended prey and it was so close now and he knew that it was the prey that his new bestial form most desired. The beast that had once been Velkan drew level with the prey although the crest of another hill concealed him so the prey was not aware of his presence. His front paws and the razor sharp claws upon them met a blackened tree trunk followed shortly by the hind versions. The muscles in these limbs tensed and launched the creature in a flying leap twisting in the air to land solidly on two hind legs. The tree trunk splintered and was uprooted by the force that propelled the creature many meters through the air and landed with a force that cracked many of the cobbles beneath its paws. ...read more.

The creature folded, bent double it made a feeble attempt to defend itself but its claws scraped harmlessly of the night black armour. The human made a two handed strike across the creature's knees taking the right with the head of the hammer and sweeping the left with the handle. The creature fell face down onto the cobbled road and let out a moan of pain. Standing up to his full imposing height the human let the hammer slide in his hands to the end of the haft. Bringing it up slowly above and behind his head he brought it down at an unforgiving pace into the centre of the creatures back with the scream and thunderous smash of the weapon. The creatures back arced along its entire length. Its head coming up almost to meet its hind paws. Its limbs fell limply back to the ground billowing dust up from where they fell, they would not move again. Velkan welcomed deaths sweet embrace, he felt the creature release its grasp on his body and mind and he savoured the felling as the great and terrible hunger finally subsided. His vision returned to normality and in his last view upon the mortal plains he saw utmost beauty in everything around him. In the design of each plant and animal and in the land itself, which seemed to him alive as he subsided into death, a greater consciousness created from each anonymous creature and plant. And so, in his final breath, Velkan forced a pair of words through an unsuitable mouth that was finally his own, "Thank you". ...read more.