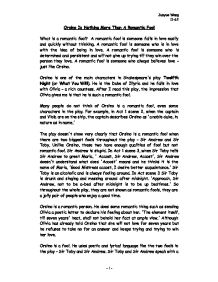 Orsino is nothing more than a romantic fool.

For example, in Act 1 scene 3 Sir Andrew says ' I would I had bestowed that time in the tongues, that I have in fencing, dancing and bear-baiting'. Orsino uses the same type of language; in Act 1 scene 1 he says ' If music be the food of love, play on, give me excess of it.' Compare the language that Orsino and Sir Andrew uses, when can see that Orsino has some qualities of been a fool in the play. As same as lots romantic fools, Orsino is a very shy, insecure person. He wouldn't directly show his feelings to Olivia. He is scarred of being rejected so he keeps sending Viola to ask her is she would court him. On the other hand, he may not be secure about himself and he has no enough confidence to woo Olivia himself, so he calls upon Viola to court Olivia on his behalf. Orsino is a fickle person. He is desperately in love with Olivia even though he has only properly seen her once ' O spirit of love how fresh and quick art thou,'(Act 1 scene 4). ...read more.

Maybe because the romantic things that Orsino does make Viola feels romantic and then she falls in love with him. All the evidence shows that Orsino is romantic fool. He is romantic, fickle, persistent and insecure. He falls in love with Olivia with an idea of being in love. He wouldn't go himself to Olivia to show his love for her. He doesn't leave any space for Olivia and doesn't understand Olivia's feeling. He forgets about Olivia when he knows that Viola is actually a woman. I don't feel that romantic fools are foolish. Instead of it, I think it is a pity to be a romantic fool. They may never know what true love is while they always have an idea of being in love. I am glad to see that Orsino marries an intelligent, resourceful woman. I think he will do everything romantic for Viola just likes what he did for Olivia. Sum up, I feel that Orsino is nothing more than a romantic fool and Shakespeare gave a very happy ending to Orsino - a truly romantic fool. Junyue Wang 11-62 - 1 - ...read more.