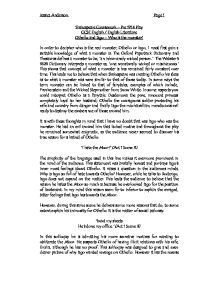 Othello and Iago - Who is the monster?

Shakespeare Coursework - Pre 1914 Play GCSE English / English Literature Othello and Iago - Who is the monster? In order to decipher who is the real monster, Othello or Iago, I must first gain a suitable knowledge of what a monster is. The Oxford Paperback Dictionary and Thesaurus defines a monster to be, 'an inhumanely wicked person.' The Webster's 1828 Dictionary interprets a monster as, 'one unnaturally wicked or mischievous.' This shows that concept of what a monster is has remained fairly constant over time. This leads me to believe that when Shakespeare was creating Othello his ideas as to what a monster was were similar to that of those today. In some ways the term monster can be linked to that of fairytales, examples of which include, Frankenstein and the Wicked Stepmother from Snow White. In some respects you could interpret Othello as a fairytale. Desdemona the pure, innocent princess completely loyal to her husband; Othello the courageous soldier protecting his wife and country from danger and finally Iago the machiavellian, mendacious evil ready to destroy the exuberance of those around him. It is with these thoughts in mind that I have no doubt that was Iago who was the monster. He had an evil around him that lacked motive and throughout the play he remained somewhat enigmatic, as the audience never seemed to discover his true reason for is hatred of Othello. 'I hate the Moor!' (Act 1 Scene 3) The simplicity of the language used in this line makes it evermore prominent in the mind of the audience. This statement was brutally honest and portrays Iago's inner most feelings about Othello. It raises a question in the audiences minds, Why is Iago so full of hate towards Othello? However, while he talks to Roderigo, Iago does not expand on the matter. This leads the audience to believe that the reason he hates the Moor so much is because he overlooked Iago for the position of lieutenant. ...read more.

Othello believes he is saving Desdemona from committing more sins. As I have stated clearly before, despite everything he still cherished Desdemona! 'I would not have thee linger in thy pain.' (Act 5 Scene 2) Othello wants to cause Desdemona as little pain as possible. He wants to preserve Desdemona, so he didn't want to spill any of her blood. In some respects Othello desperately wanted her to live and by keeping her body as life like as possible he is doing it. Othello is being ripped apart; a part of him still didn't want to kill her. He feels that if he leaves her body unmarked he can absolve himself of responsibility! In comparison, the way Iago killed Emilia is in desperation! He has no compassion for Emilia. He kills her to preserve his own life and honour, not because she betrayed him or because he loved her, but for his own benefit. 'EMILIA: He begged of me to steal it IAGO: Villainous whore!' (Act 5 Scene 2) This is the first time that Iago's true nature was revealed to everyone, including Othello. This murder was brutal and unnatural. He cowardly strikes her from behind and she had no chance to retaliate. Iago doesn't care how much blood was shed, only that his life was intact! Not only does this death symbolise Iago's plans unfolding, but it was also a time of realisation for Othello. He now comprehended that Iago had been feeding him lie upon lie! A monster is amoral; it doesn't have the ability to feel emotions such as regret, guilt, love or sorrow. This adds to my belief that Iago is the monster, he displays no sign of any of these feelings. He gloated over the torment he caused others, such as Othello. He takes a heinous enjoyment in his own cunning, and one feature remains strong in my mind is the fact that he never apologised. 'From this time forth I never will speak again!' (Act 5 Scene 2) ...read more.

Whenever they were weak, or in distress, Iago is there ready to entrap them with his wicked but secretive ways. 'I'll pour pestilence into his ear.' (Act 2 Scene 3) In this quote Iago was directly referring to his plan of ruining Othello, by creating a plan that made Othello believe that his wife was having a relationship with Cassio. Iago's role is to arouse questions in the Moors head of Desdemona's faithfulness. Iago does this quite effectively, whispering seemingly innocent comments in Othello's ear! Iago in some respects does not deserve the title monster, as the enormity of his villainous was more in parallel with the devil. His scheming, ruthlessness can in fact only be compared to that of the devil. On numerous occasions throughout the play he or others made reference to hell and the devil. 'Hell and night Must bring the monstrous birth to the worlds light' (Act 1 Scene 3) In his first soliloquy Iago fashions a link between himself and hell. From that point on the audience associate him with everything that is evil! In these lines we see Iago's true colours, and a preview of the chaos he will wreak over Cassio and Othello's lives! In Act 2 the references to hell and the devil become even more apparent. 'Divinity of hell!' (Act 2 Scene 3) This use of an oxymoron is very effective in showing that to Iago hell is a good thing. It was the first time in the play that Iago actually embraces his evil power of manipulation. In my mind it cemented Iago as the Machiavellian monster of the play! While using hell and devil to describe his nature, Iago also uses it to make derogatory comments about Othello's colour, rather than his character. There appears to be an underlying theme of racism, that could be responsible for part of the jealousy and hatred that Iago feels towards Othello. At a time when black people usually appeared to be inferior to the whites, it must have been hard to take orders from Othello. ...read more.