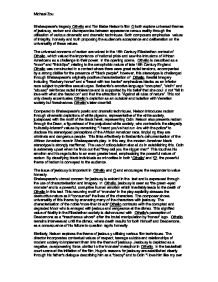 Shakespeare's tragedy Othello and Tim Blake Nelson's film O both explore universal themes of jealousy, racism and discrepancies between appearance versus reality through the utilisation of various cinematic and dramatic techniques. Both composers emphasise values of integrity, honesty and truth proposing the audience's acceptance and deliberation on the universality of these values. The universal concerns of racism are voiced in the 16th Century Elizabethan context of Othello, which valued the importance of national pride and saw the intrusions of African Americans as a challenge to their power. In the opening scene, Othello is described as a "moor" and "thick lips", relating to the xenophobic nature of late 16th Century England. Othello was constructed in a context where there were great racial tensions, accompanied by a strong dislike for the presence of "black people", however, this stereotype is challenged through Shakespeare's originally positive characterization of Othello. Bestial imagery including "Barbary horse" and a "beast with two backs" emphasizes blacks as an inferior race subject to primitive sexual urges. Brabantio's emotive language "corrupted", "stol'n" and "abused" reinforces racial intolerance and is supported by his belief that she could not "fall in love with what she feared on" and that the attraction is "Against all rules of nature". ...read more.

The composer shows universality of this theme by ensnaring many of the characters with jealousy. The characterisation of the noble 'more than black' Othello contrasts with the corrupted and degraded Moor who is enraged with jealous and vengeance at the climax. This signified value of fidelity in the Elizabethan society is dishonoured with Othello's perception of Desdemona as a "treacherous whore" after the brutal manipulation by 'honest' Iago. Othello remains interweaved until the climax, where death results for both himself and Desdemona, as a consequence of his failure to question Iago's honestly. Similarly, Nelson explores the theme of jealousy utilising various film techniques. The director incorporates contextual values of respect, teenage suicide and relationships of modern society to implement them into the theme of jealousy. Jealousy is depicted as a negative, overpowering force, similar to the 'monster' metaphor in Othello. In the basketball court scene at the initiation of the film, Hugo's reasons for jealousy are established clearly through his father's dialogue describing him as a "decoy" and to Odin "I love him like my own son". ...read more.

At the beginning of the film, Hugo reveals his innermost thoughts to the responder with the voiceover. This provides the audience of Hugo's motives are and thus, allow them to understand and account for his manipulation throughout the film. This is a similar technique to a soliloquy, although it allows for a visual image to progress simultaneously. Lighting is an important technique used to visually represent Hugo's hidden nature. This is used to visually represent the false illusion that Hugo presents to his surrounding characters. In most scenes where there are close up shots of Hugo, half of his face is shadowed with darkness. This may be interpreted as visually representing his two-face nature. This also emphasises Hugo's deceitful nature. Hugo adopts a facade, manipulating others with his reputation of honesty and in this, reflecting a challenge to the 21st Century value of honesty. Overall, the two composers from different contexts use various techniques to explore the concerns of racism, jealousy and appearance versus reality. Shakespeare has used dramatic and poetic techniques to illustrate these concerns, which were relevant to Elizabethan society while Tim Blake Nelson has adopted various film techniques to portray the same universally relevant issues. ?? ?? ?? ?? Michael Zou ...read more.