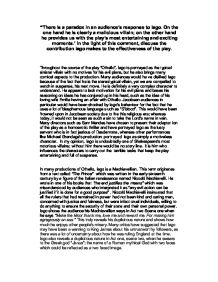 "There is a paradox in an audience's response to Iago. On the one hand he is clearly a malicious villain; on the other hand he provides us with the play's most entertaining and exciting moments.' In the light of this comment, discuss the contribution Iago makes to the effectiveness of the play. Throughout the course of the play "Othello", Iago is portrayed as the typical sinister villain with no motives for his evil plans, but he also brings many comical aspects to the production. Many audiences would have disliked Iago because of the fact that he is the stereotypical villain, yet we are compelled to watch in suspense, his next move. He is definitely a very complex character to understand. He appears to lack motivation for his evil plans and bases his reasoning on ideas he has conjured up in his head, such as the idea of his loving wife Emilia having an affair with Othello. Jacobean audiences in particular would have been shocked by Iago's behaviour for the fact that he uses a lot of blasphemous language such as "S'blood". This would have been frowned upon in Jacobean society due to the this religious era; whereas today, it would not be seen as such a sin to take the Lord's name in vain. ...read more.

In a speech made by Iago, he mentions Roderigo's money eight times! He uses repetition to encourage Roderigo to make money, but the implication to the audience is that the money is for Iago and not Roderigo. Roderigo then says, "I'll sell all my land" which tells the audience that Iago's plan has worked. This prepares us for later on in the play when Iago uses his powerful manipulation to bring Othello to his downfall. Although Iago is often called the villain of the play, he also brings many entertaining moments; he is the only source of humour in the play. This may be perhaps, because he has caused all the misery in the play so is enjoying watching people suffer! He expresses his misogynistic views in Act Two Scene One in a heated discussion with Desdemona. Iago begins the discussion through the means of criticizing his wife, Emilia. He says "Sir, would she give you so much of her lips as of her tongue she oft bestows on me You would have enough" meaning Emilia often nags him. This shows that Shakespeare wished to amuse the audience too, as they would find this very entertaining possibly because they could relate to what Iago was saying, as it could be interpreted as a commonly stereotypical comment. ...read more.

This would be very frustrating for audiences who have been puzzled throughout the play as to what motivates Iago to cause such trouble. In conclusion, I believe Iago's character structures this play and creates the story line; some of the most exciting plots are centred around him - he murders his wife, arouses Brabantio, kills Roderigo and gets Othello's army drunk; His actions definitely drive the plot forward. His soliliques not only ensure he has a very intimate relationship with the audience, but they are the only dramatic device of the play. Although there is evidence to prove Iago is not racist, he is just jealous of Othello as he talks about Othello giving Cassio the promotion instead of him. To us, he is the character who keeps the plot alive and full of action. His character was used recently by a critic, Germaine Greer when she compared Shakespearian with current times to emphasise her point. She stated, "we no longer feel, as Shakespeare's contemporaries did, the ubiquity of satin, but Iago is still serviceable to us, as an objective correlative of the mindless inventiveness of racist aggression. Iago is still alive and kicking and filling migrants letterboxes with excrement" So, it really is a question of, should the play have been called "Iago" instead of "Othello"? ...read more.